I was the first one to suspect that there was a chance Lucas had autism. At the time, my son wasn’t even two years old and had begun to show warning signs in his behavior. He would flap his arms when he became excited and had to be tricked into making eye contact for photographs. With each passing day, it became clearer to me that something was wrong.

That was one of the scariest periods of my life. It would be some time before I blurted it out during a family dinner at the California Pizza Kitchen, informing my wife of my suspicions. For months prior, I was alone. His red flags were so clear to me while everyone continued on around him. I never said it out loud or told anyone my fears. All I could do was hope I was wrong and try to find reasons to believe that I was misreading his mannerisms.

That never happened though. Each time I found a glimmer of hope, I was quickly brought back to Earth. The signs that I was wrong were fleeting. The signs that I was right were abundant. I had knock-down drag-out internal struggles daily. I beat myself up for suspecting the worst and then beat myself up more for being right. Eventually, I accepted what I knew to be true.

All the while, I asked one question to myself.

Why does he do these things?

Why does he clap while walking past mirrors? Why does he stare at angles in glass? Why does he suddenly laugh without warning or cry during an innocuous part of his favorite show? Why doesn’t he speak? Why are all these things happening…to me?

The question, at the time, was a bigger picture thing and mostly self-centered. It was meant to answer the age-old question of, “Why does my child have autism?” It wasn’t about him at all. It was about me. I pitied myself and kept wondering why this was happening – whatever “this” is. You want to wring your hands and wait for some higher power to say, “It’s OK. You’ve had enough. I’ll make it all normal now.”

That doesn’t happen, though. To be honest, I no longer wish it did. As the years went by, I learned to accept my son for who he is. I love both my children more than anything and can truthfully say that, if given the chance, I would do everything all over again. This is who he is. He’s lovable and wonderful. I wouldn’t want any other son in the world. I feel just as lucky to have him as he is to have me.

It wasn’t until recently, however, that I found myself asking that same question again in a very different way.

Why does he do these things?

Now, the meaning is different. I watch him glide past the mirror clapping or breaking into random hysterics and wonder, why? What is going on in his world? How does his brain work? What does he see when he does these things that no one else is able to understand?

My take on Lucas’s actions has gone from frustration to fascination. I no longer try to hold his hands when he begins to slap them together or shush him when he starts laughing out of nowhere. Instead, I try to be a part of it. I try to understand a point of view unlike any other I’ve ever known.

Lucas and I never bond as much as when I take part in his activities. The first time this happened was when he was playing with his toy telephone on wheels. For months, he would roll it under the chair in our living room. Carefully watching it in the mirror, he’d slowly pull it out by its string and repeat. I had watched from afar while he did this quite often.

The day I sat next to him and tapped my chest to ask if he would let me join him changed everything. His eyes widened as I took my turn carefully pushing and pulling it just as he does. I could see him truly marvel at the fact that someone else was doing the activities that he would always do on his own. When we were done, he came over and hugged me.

We’ve never been closer and it’s changed how we see one another. I no longer yearn to change him. Now I yearn to understand him. My goal was always to be able to take part in my son’s life. It turns out that it was much easier than I expected. After all these years of waiting for Lucas to come into my world, I finally realized I could just go to his. 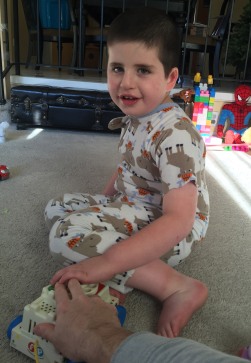