I hate to admit that I used to fear my son’s birthday, but it’s true. It may make me cringe upon reflection, but it’s important to remember how things were. Otherwise, I won’t appreciate how proud and lucky I eventually realized myself to be.

For many children, birthdays are a celebration of achievements. Everyone marvels at how much they’ve grown and all they’re doing.  To most people, success for children is measured in words and skills. If a kid is reading, writing, or ‘rithmaticing by a certain age, everyone is clapping.

Lucas, however, didn’t have early birthdays like that. For my son, these parties became a reminder of missed milestones and undetermined waiting periods. They were deadlines of deals I had silently made with the universe about when things would surely be “OK.” He has to be talking by two…then three…then four. Every new cake was a new date that I had sworn he would be speaking by.

There was a double dose of guilt in those instances because not only did I feel guilty for my son missing these deadlines, I felt guilty for making them to begin with. After all, this was his special day. For a sweet little guy who asked for so little both figuratively and literally, he deserved to be celebrated. Sure, I did that on the outside, but on the inside , I was ripping myself to shreds. 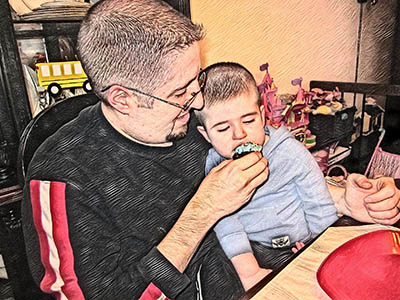 Adding to that, he seemed to be indifferent to the whole thing anyway. While Lucas enjoyed hearing “Happy Birthday” sung, he didn’t want to be involved in the party games and typical festivities that we all associate with birthdays. So, we threw parties that he didn’t care about with people who questioned why he didn’t talk while we tore ourselves up inside about all the things that, surely, we were doing wrong. The entire process may have been a birthday but it was far from happy for anyone.

That was then. Today is now. And now, Lucas is about to be nine. He has autism and he is non-verbal. Those are no longer worries. Those are facts. He still cares little for birthday games and many of the traditional party clichés.

The difference now is that we’re all excited for his upcoming birthday. We have no more deadlines. We have no more forced events. We no longer try to push our view of festivities on a boy who’s more unique than any happy birthday handbook. Instead, we honor him with a day that, above anyone else, is specifically for him. It’s the special day he deserves.

This year, we’re leaning towards a trampoline. It seems to check all the boxes in the Lucas-sense of the word. I can’t really foresee it failing to make him happy. To be honest, the older he gets and the more we get to know him, the easier this challenge has become. We may fall short here and there, but we tend to have more hits than misses.

I’m also no longer beating myself up about anything he’s not doing because I love all the things that he is doing. When he was still toddling, my son was still emerging as a member of our family. Missed milestones were less about the personality he had and more about the personality we guessed he would eventually possess. Our baby was just our baby. The upcoming years were unknown and rather frightening. Who would he be?

Now, we know who he is. He’s amazing.

He’s no longer our baby. He’s our boy and one day, he’ll be our man. He’s here, we know him, and we love him. His personality isn’t about what he might or might not do. It’s about who he is and, I’m proud to say, he’s wonderful.

That’s why I write these posts and that’s why I share so much of those early fears. I know they exist for many parents and I know that they too struggle with the guilt it causes. No one wants to fear their own child’s birthday. It’s one of the worst feelings in the world.

As nonsensical as it sounds, though, that fear is good. It means that you love your child and you have concern about their future. In that moment, you want things to be perfect. We want all of our children, whether or not they have autism, to be perfect. Worrying about them in any way doesn’t mean you’re bad. It just means you’re a parent.

I wanted Lucas to be perfect. The only problem was that I thought language and developments were what made him perfect. They weren’t. He didn’t mirror the checklist you read in textbooks but still, he’s perfect. In fact, he’s the most perfect boy I’ve ever met.

So, worry about the future. You’re allowed. Just know that one day the future will be here and, when that day comes, no matter what does or doesn’t happen, everything will be perfect. You’ll see.

JG Note: Proud to announce that I have started contributing blog posts to Autism Speaks, as well as here on Hi Blog! I am so grateful for the chance to share my family with the world and for the support that so many of you have offered. You can check out my first post here: “My son may be different, but we’re all different” and my second post, just published Monday, here: “A moment of unexpected kindness towards my son”