I feel like I overpack whenever I bring my son to birthday parties. He’s been to two this year and three in his lifetime, so the entire process is still fairly new. I’m learning.

His backpack gets loaded up with a juice box and snacks (in case he gets hungry), an electronic toy (in case he gets bored), his communication iPad (in case he needs to request something that his hand gestures can’t express), and a change of clothes (in case he dives headfirst into the cake). Each time, I hope I need none of them, but I always expect to need all of them.

As of now, he’s only used his juice boxes. Everything else has been extra baggage, but the first time I leave one out will be the first time he needs it. I can feel it in my bones. That’s how he gets me. As soon as I’m too comfortable, that’ll be the time he catapults himself into the dessert tray. 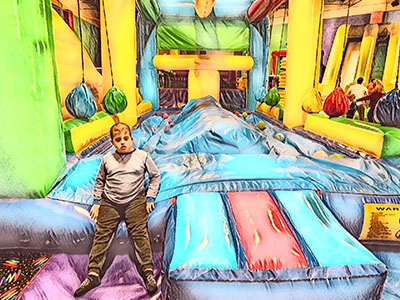 I’m always trepidatious before moments like these. I worry about Lucas and whether he’ll be happy or fit in with the group. He’s my main concern and, having experienced many moments of awkwardness early on in his life, I always expect the next one to be right around the corner. The days leading up to the festivities can cause me to question whether it will all be worth it.

Then, the parties happen and they’re worth it. Neither of the two he has been two in recent times have been anything but fantastic and that’s been almost entirely because of the people there.

In fact, these events are more than fantastic for him. They’re fantastic for me. They’re a chance to speak to the parents of children that he interacts with every day. These are children who I know by face and name, but rarely hear stories about. My non-verbal son isn’t telling me funny tales from his day and my interactions with these children are sometimes limited to waves and smiles. Yet, I’ve seen them all grow up, much like I have with my neurotypical daughter’s friends. They’re a part of his life and, among other reasons, it makes them important to mine.

There are other reasons. His friends’ families also have shared experiences and situations that pertain to ours. These moms and dads deal with the same teachers, aides, and administrators that I do. The daily grind of special education can feel isolating when I’m surrounded by friends outside that loop. The parents of his sister’s classmates will often ask how Lucas is doing in school and I can tell them. They genuinely care and offer advice, but it is usually limited to second hand knowledge and good intentions. It’s only the parents of Lucas’s friends that can give me a direct view of their own based on first-hand experience.

It’s at these parties that I learn about so many things that are important to my son. I’m not talking about classroom gossip, although if there is any, I’m all ears.  I’m talking about administrative decisions and how to file paperwork, programs that can help my son, and events that can give Lucas a chance to socialize rather than sitting at home and watching Elmo until his eyes turn red and furry. I can sincerely say that I like all of them and, when it comes to Lucas, these are definitely are people.

Without these events, my child would just be an individual without a place. He would forever be the kid at holidays who, although loved and adored by all, doesn’t quite link up with the other social circles. He’ll be the “unique” one or the boy that they all cheer for when he waves goodbye. While sweet and wonderful in its own way, that’s not all he is. He’s a person and there are many other people out there just like him.

Part of his Autism, though, keeps those people away. Lucas will never say, “Yo. Invite Mason over.” That’s because Lucas doesn’t say anything at all. In fact, Lucas might not even appear to care if he sees Mason in public. It’s our jobs, as the parents to Mason and others, to bring them together. Once we do that, we too come together. That’s how we build these bonds and that’s how we complete our children. That’s how we change from individuals into that “village” we hear so much about it taking.

These people make up my son’s village and they make up mine. It’s easy to forget that sometimes. There’s so much “us against the world” mentality that goes into having a child like Lucas that it can often get lost in translation. Yes, when it comes to fighting for his well-being, I have to be an “Autism Warrior”, no matter how little I like that phrase. But when it comes to building bridges with others who know what is best for a child in his position, I have to be his dad.

I’m grateful for these people and I know that my son is too. He might not be able to show it now, but he is. The smile on his face when he’s bouncing in a bounce house and eating a birthday cake show me that. The advances he makes thanks to their advice does too. This is his village and we couldn’t feel more at home than we do there.