I could start this off with the old cliché.

What do you teach your non-verbal son?

Well, it’s more about what he’s taught me, old chum.

I could, but that would be kind of, uh, well, I guess I just did. Nevermind. Brilliant opening.

That’s not the full gist of it all, though. Being a special needs parent with a non-verbal child hasn’t just taught me valuable lessons about myself. It’s taught me about the world around us. Lucas’s similarities to others are a subject I talk about a lot. That’s because it’s true. By being his dad, I’ve become aware of lessons that can be applied to the world. These are life lessons many people never get to appreciate.

You don’t have to understand why someone is upset in order to show sympathy and compassion.

Sometimes my son gets upset. It feels random and, if I’m being honest, it might be. In some instances, I can pinpoint the cause, even if not the reason. It could be a spot on a YouTube video or a certain parking lot that causes tears from nowhere. I don’t know why it affects him, but it does and it breaks my heart.

When that happens, I don’t brush it off. Sure, I recognize that it isn’t a major threat to his life or physical well-being, but it upsets my son. My job is to comfort him, so that’s what I do. Still – cards on the table – I don’t always get the reason.

Do you know who else that happens with? Everyone. Every…single…person…I have ever dealt with on this planet has had fits for reasons I don’t fully understand. Everyone, no matter the gender or my relationship to them, can have eratic emotional outbursts. People will react without even knowing the reason themselves.

My daughter, then 7, once famously summed it up. When I asked why she was being grumpy, she took a deep breath, looked out the car window, and screamed as loud as she could:

Sometimes people understand you…they just do what they want anyway.

One of the biggest hurdles with a non-verbal child is discovering what they understand and what they don’t. It is helpful when determining their receptive language for words that might be instrumental in their lives. It’s also how you know if he’s just being a little bratty chubella and trying to stuff a sleeve of cookies down his throat like a pelican.

My son understands a lot. Sure, there are areas we struggle with and I see the confusion in his eyes when we approach a foreign concept. That’s when I pull it back, settle down, and try to explain it with motions he might understand.

Other times, he will look me right in the eye, sign “no, no, no,” with his finger and then shove an entire burrito, made for someone else, into his round little face.

There’s a difference between innocent naivety and deliberate selfishness. My son demonstrates it on the most easy-to-see levels. The rest of the world does so with varying degrees of transparency. Many times I have convinced myself that if only this one person could hear this one argument, they would understand why their actions are wrong. After all, they couldn’t want to be doing something bad, right?

Then I realized that they already know. They don’t care. Embrace that and accept that hard truth. It’ll save you breath. Using words is overrated.

That’s another one he taught me.

Words are a small portion of communication.

You have almost definitely heard someone complain that texting and email take away all sense of tone in language. Someone writes, “Good to see you.” And you think, “Who the hell does he think he’s talking to?!”

That’s because the words we use aren’t the end-all, be-all. People can tell when you’re upset by non-verbal cues. They can read your eyes, your movements, and the timing of your breath. The longer I have had Lucas in my life, the more I have been able to spot these signs in both him and others.

It’s important when you have a boy like him. It’s how you figure out illness and distress. It’s the entire basis of our relationship. Reading body language and trusting instinct is how the world has survived millions of years. You see it when you look for it.

I feel as though the bulk of my life has been spent alone. Physically, emotionally, and spiritually I have been an island over the course of many decades. If you asked me how I was then, I’d have said “great.”

I struggled with self-worth and finding my place. It’s easy to feel unneeded, at times. Then my son came along.

Lucas needs me. That’s the greatest feeling in the world. Is it pressure? Absolutely. Is it pressure that reminds me that, no matter what happens, this boy will always see me as the person who has his back? Yes.

Bringing other people into that circle can be difficult. Seeing the good I introduce to my boy’s life makes me realize that I am a good person. I deserve other good people in my life. Even when I look poorly upon myself, I know he doesn’t. It lifts me up.

It makes me feel like the person who deserves the love of Lauren and Christian in our lives. Having someone to share these days with, be they good or bad, makes them worth having. Lucas and my daughter make me a better person so I can feel deserving of having Lauren in my life. She then makes me a better person so I can better parent my children. Even if the world crumbles around me, I know I’ve found balance. My boy showed me I deserve that.

If you’re doing something for a “thank you”, don’t do it. 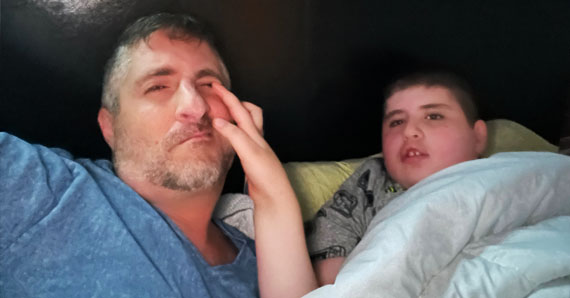 Lucas has never thanked me for anything. Heck, his teenage sister still needs reminders and she has too many words. As a parent, whether your child has verbal language or not, you do a thankless task for negative money. It’s a scam, I tell ya.

The things I do for my boy range from easy to overwhelming. There have been cleanup mornings I wouldn’t wish on my enemy and stunned expressions of horror over the unexpected view before me. Still, I do it. I do it because I love him.

Then, as I’m cleaning up his mess, and he taps me on the shoulder incessantly crying for Pirate Booty, I still remind myself that I love him.

As he’s on the floor, rolling around in a fit of rage over Pirate Booty, I still remind myself.

Then, as he’s eating Pirate Booty while I run out to the dumpster, I remind myself that it’s not about being appreciated. It’s about getting a job done. It’s done. We’re good. I did that.

There are, however, times when I get a random kiss on the cheek or a hug as he comes skipping by. Those are my thank you moments. Those are the gems I collect along the way. I don’t expect them so they mean so much more when I get them.

The only thanks I expect is from myself. Most times, I’m surprised. That’s the best part of lowered expectations. The world seems to be a lot friendlier than what you figure you’ll get.

By the way, if you’re reading this, thank you. You’re good people.