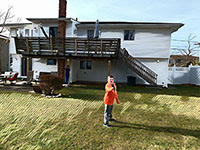 We got one of those phone calls on Friday, right as school was coming to a close. Parents of non-verbal children like my son are familiar with the call. It’s the one where they say something happened to him and they’re not sure what, but they want to make sure we’re prepared for whatever shocker will arrive when the bus pulls up. In this case, Lucas “must have hurt his leg” because he was limping his way home.

To someone who strictly has neurotypical children, a message from school like this must sound insane. It would cause panic bells and red alerts.  How can the teachers not know how, when, where, or why their child sustained an unspecified injury? Call the authorities!

In my house, though, we understand calls like this. In many cases, you can just call it a Friday.

When the bus rolled up 20 minutes later, I looked up the staircase as the doors swung open. There he was. My round-faced little fella was hobbling along with a limp in his step and – yup, you didn’t guess it – a giggle on his lips. 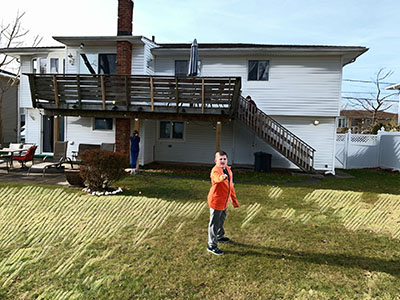 This paradoxical behavior is nothing new. Guessing at my son’s mood or emotions can sometimes be a roulette wheel of randomness. With every agonizing movement, he laughed along and refused my help. Instead, he exited the bus and did the usual strut across the front lawn on both his legs – even the crooked one that appeared ready to snap in half.

Once inside, we began our in-home diagnostics. I touched his leg and tried the verbal approach.

Lucas, what happened? You got hurt? Your leg? Ouch? Where did you get hurt?

He sat on the stairs, grinned from ear to ear, and lifted his foot for me to remove his shoe. To Limpy, it was another day at the office and he wanted to get into his play clothes and on with his play day.

The next step, pun intended, was to begin squeezing parts of his leg and looking for a reaction. I poked his ankle, pinched his knee, and rubbed his calf. None of those garnered a pained response. The best I could do is to offer him a pillow, a blanket, and his trusty iPad. I patted the couch and tucked him in. That’ll keep him still while his body heals whatever he did to it, right?

Wrong. Within minutes, he was up and jumping with delight. His iPad brings along frenzied excitement and soon all he could do was hop up and down while clapping along to whatever Sesame Street song was blaring through the speakers. I’d see this and immediately switch to Dad Mode.

Lucas! No! Sit down!

He’d realize he was being spied upon and hurry back to his spot, with his leg twisting in the wind like one of those tiny pretzel sticks in the small yellow salt-filled boxes. His face showed no signs of any pain. All he showed was signs of Elmo-worship. This kid gives me heart palpitations.

The next morning, he woke up and his knee was swollen, which narrowed down the area of injury. Talk switched to doctor’s visits and taking Monday off from school. Lucas, however, was less worried about a splint and more worried about his sprint because he jetted away on his bloated leg and took off down the stairs to jump away the morning while clapping to YouTube Kids.

By the end of the weekend, we had a choice to make. Can we send him to school? I never want to put him on the bus just to get a Lucas-free day, especially if he has some sort of ailment. Truth be told, though, I’m wasn’t sure what he has. All I knew was that I would be called within minutes of the opening bell to come pick him up and the school nurse would have a hint of disgust in her voice. I wasn’t ready for that. Still, though, there was a sense of uncertainty in the air.

I know the question most parents would be asking in this situation. I can hear it in my head now. “Is he having trouble walking?”

Yeah, he’s still running at top speed on that bum wheel. He looks like the scene in Child’s Play after they blow up Chuckie and he hops up and wobbles off in a hurried frenzy.

Not specific enough for you? He’s running around like a sentient scarecrow on fire. An enchanted nutcracker being shot at. A windup toy hooked up to a car battery. You get the idea.

So, keeping him home would require taking our coked-up Tiny-Tim to the pediatrician. That’s where Dr. Sniffle-swiper can look at the swollen knee and say, “Yup. That’s swollen alright. Give it a few days.  Pay Stacy up front.”

Whatever is wrong with this kid falls between a minor bump to a shattered femur and every possibility in between. It’s one of those times where words would really help us out. Then again, his sister has over-exaggerated pain before and she has more words than a Scrabble factory. So, you can’t really go by that either.

No worries, though. We’ll get through this. It’s not the first undefined injury that our little track star has sustained. Once this is taken care of, it’ll all be back to normal and we’ll have nothing to worry about again.

Well, until about a week later when we get a note home saying, “Lucas didn’t seem himself today. He was holding his head. We’re not sure if he has a headache. Maybe you can keep an eye out for it.”

That’s when we wonder if he’s got something between small head cold or an aneurysm. That’s next week, though. We’ll hobble our way there soon enough.

JG Note: This past week, I returned to The Mighty with a new post that was featured on Yahoo Lifestyle. It’s an article that I felt speaks to an important subject – the role of fathers in the lives of children with special needs. Please take a moment to check it out and thanks to all of you for your support of Hi Blog!  – https://themighty.com/2020/01/dad-son-autism-not-hero/