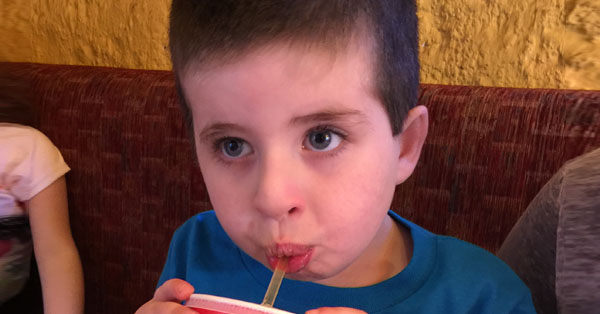 My son is built like a Christmas ham with arms and legs. He’s a solid little bruiserweight that, if he wasn’t non-verbal with autism, would be recruited for the defensive line of a pee wee football team. He’s tough, thick, and gobbles up whatever is in his way.

He got that way from eating whatever he can find. While we might present him with plates of healthy options, Lucas doesn’t limit his food intake to that. He’s constantly on the prowl for whatever tasty morsels have been disregarded by others, whether for a moment or forever. If he finds it, it appears delicious, and no one is looking, he’ll eat it. Actually I take that back. He doesn’t care if you’re looking. If he’s hungry enough, he’ll eat it anyway. Right in your face. Chew, chew, swallow. Deal with it.

When you couple his insatiable appetite with his surprising cat-like agility, it makes for some embarrassing moments. My daughter’s basketball trophy ceremony comes to mind.

Our whole family, along with many others, was wedged into the multipurpose room of our local church. The event was somewhat chaotic. Kids were running up on stage and you were never sure when exactly it would be your child’s turn. As most parents know, though, when that time comes, you need to be able to simultaneously clap, yell their name, and take a picture. It’s a lot of pressure.

When that moment suddenly sprung upon us, I looked up with a hefty “hooray” and began cheering for my daughter’s success. I also took a quick glance around to make sure Lucas hadn’t dashed out the front door. Luckily he didn’t. Instead, my then-five year old son was standing one table over and sucking down a Venti Iced Coffee from Starbucks through a straw. He was doing it at such a breakneck speed that I expected him to get sucked into the cup itself like a cartoon character. He always makes such an intense face when he feverishly drinks from a straw. It made me smile, but only for a second.

Then I realized he was drinking coffee and I panicked a bit.

Then I realized that no one in our family went to Starbucks that day. Then I panicked a lot.

Then I realized that he was behind another family, who had all stood up to applaud their child. The mother had left iced coffee unattended.

Then I freaked out.

She turned around with a confused smile and we began to profusely apologize. I didn’t really have much explanation to offer. When Lucas shouts out or does something impulsive, I can always shrug and say, “That’s what he does.” But stealing coffee from strangers and then using their germy straw to down it all before they could turn around from a four second applause break was a hard one to talk our way around.

Of course, the woman was nice about it. People usually are. For some reason, I always assume they won’t be. I guess that’s more about my cynicism than his Autism though. Most of my imagined scenarios involve rude or angry strangers throwing rocks at us. In reality, they’re usually pretty understanding and it’s me who is the awkward one in that moment.

I’ve never been sure if he loves iced coffee or if he just loves the Starbucks cups themselves. He’s seven and already has more than enough energy, so we tend to keep caffeine away. Yet these giant clear cups with their green straws and paper receipts stuck to the side with condensation draw him in. He chugs them before you even know he’s gone and it almost feels like he should smash the empty cup into his forehead and let out a frat boy growl to cap the whole experience off.

The one thing I am sure of is that he knows he’s not supposed to be doing this. He understands “no”, but he also understands that you have to ride the bull if you want the ribbon. When Lucas has a strong desire for something, he lets nothing stand in his way.

I know that through many real-life examples, but the most prominent one was when I joined his classroom to make faces on pancakes. That’s a real sentence. That happened. We made pancake faces. The activity was to decorate flapjacks with toppings like candy corns and chocolate chips to resemble a person. It was actually more fun than it sounds. 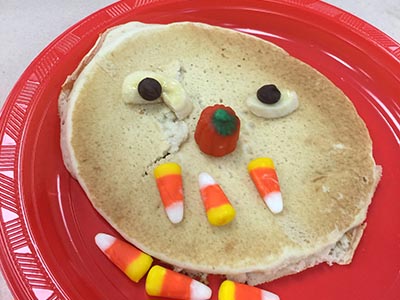 From the start, Lucas was having none of it. There was a pancake in front of him and no one would let him eat it. He was mad. He knew we had to decorate it but was very open about his unhappiness. He’d angrily throw a candy corn on top and then give me a surly expression as if to say, “There. Done. Happy? Let’s eat.”

Eventually, we finished the ceremonial face making and he was allowed to devour it like a starving bear. Not all the children ate theirs. In fact, I don’t think any of them ate theirs. We were the only duo who immediately cannibalized our candy face man. As soon as my son was finished with his, though, he started eyeing the other pancake faces around us. I knew how his mind was working and when he reached out to another desk as if to ask for their smiling plate, I told him no.

Now at this point, Lucas is covered in whipped cream and sprinkles and all the other things that went into our frowning flapjack face. He’s stuffed full of pancake, angry at me for not letting him loot the room for carbs, and not in the best of moods. The timing couldn’t have been worse as that’s when we all were told to come get their knapsacks for dismissal.

When we did, he made his move. This hefty little guy, out of nowhere, launched himself into the air sideways. He was like a shortstop gliding through space to catch a line drive. As his body sailed towards the desk next to us, he reached out his arm, and, in one motion, scooped the pancake off the plate and shoved it into his mouth. We all watched in astonishment as he landed flat on the floor with a big smile on his face – the same face stuffed with someone else’s project. His teacher said the only thing any of us could say in that moment.

And it was. What else could it be? It was over. He got his pancake. Done. People pick and choose their battles and he chose this one. You’ve got to respect that.

As he’s grown, he’s learned to control a lot of those impulses, but they still lurk just beneath the surface. I love him for it and I’m proud of how he’s become able to conduct himself in more controlled way. I’m very proud.

I also never leave a bagel with peanut butter or iced coffee unattended in the house either, though. I may be proud, but I’m not stupid.