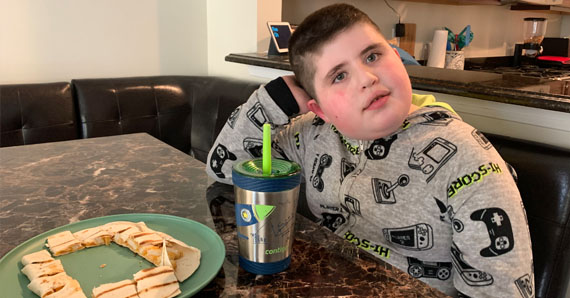 Since moving to my new home, I’ve really focused on family time with both kids, which includes eating all our meals together when they’re here. Aside from the days that my daughter has had friends over, the three of us sit at the table to eat. In this house, I can’t imagine it any other way.

When food is served, phones and iPads are gone for all three of us. There are no phone-safes or jars. I don’t make a big thing of it. We all just accept the rule. Plus, it usually buys me a few minutes of semi-civilized dinner time while they shovel whatever they can into their faces in order to return to their phones and iPads.

Lucas is usually the first to bolt from the table in favor of his electronics. After devouring the plate, he gets up and ambles over to the iPad, still chewing. It is then that I will ask him, through hand gestures.

Are you all done? All done? No more?

I clap my hands together to signify “all done”. With one hand on the iPad and his cheeks still jammed with chewed food, he’ll tap his chest twice as if to say, “Yeah, fam. I’m good.”

So, he gets the iPad. Although, a minute later, he’s trying to get more food. Of course, it makes his sister laugh, as she likes when I am tormented. Plus, it proves that although Lucas is non-verbal with autism, there are certain universal traits that run in the kids around here.

My daughter, at this point, is usually done too, but I’ve broken her phone-staring flow. So, she literally jumps out of her seat and starts trying to get her little brother to play. Spinning around the open dining area with a tablet pressed up to his face, he’s easy prey for her to toss the giant Five Below beach ball at his head. It bounces off his noggin until I step in, with a sad frown, and say, “Oh, Lucas. Come on.”

Again, I take away his iPad and he realizes that things are being chucked at his head. He’s actually a good catcher and thrower, so he appeases her for a few before returning to his YouTube Kids pausing and unpausing marathon.

It is then that she will run over and take his hands while the two of them start hopping together to the music. She laughs. He laughs too. She calls out “cheese”, which is her way of telling me to take a picture. The way he looks at her is unlike any expression I have seen him give all day. It’s pure joy.

Once upon a time, that iPad hopping time was his own thing. We let him do it, but on his own. Now, as our understanding of each other has evolved, so has our interactions. While there are still things he likes to do that we don’t understand and vice-versa, we make it work. We can not only bring him into our world, but we can go into his. Whether it’s stimming along with a toy car or hopping along to his shows. If he can sit through an orchestra concert for her, she can do the equivalent for him.

A third part of all of this exists, though. It stretches beyond Autism Awareness and Autism Acceptance. It’s Autism Inclusion. It’s what happens when, after dinner, we go downstairs to the big couch. Here it is on full display as we all sit to watch television.

Well, that’s not entirely true. My daughter and I watch the TV while Lucas sits with us, iPad in hand, watching his own shows. There’s no attempt to make him appreciate our tastes and we don’t have to stare at his. We simply sit together. The program on for us works in tandem with the video on his device. It’s dramatic episodic content with a side narration by The Wiggles.

Excited, Lucas will react to his shows in the same ways he always does. He will scream-out squeals of happiness or – his personal favorite – clap with ferocity. His goal in times like these, I’ve learned, is to make the biggest echo. It makes for some pretty epic noise during peak TV viewing time.

Is it a perfect scenario? No. Many times, his expressions of glee will drown out the dialogue and there are more than a few parts that have to be rewound. There have even been times when I’ve used closed captioning to counteract his jubilation. It’s fine by us, though. Lucas stays. We’d rather rewind and have him be there than the alternative.

At most, after a particularly loud scream, I will look up and ask him, “Dude…?” 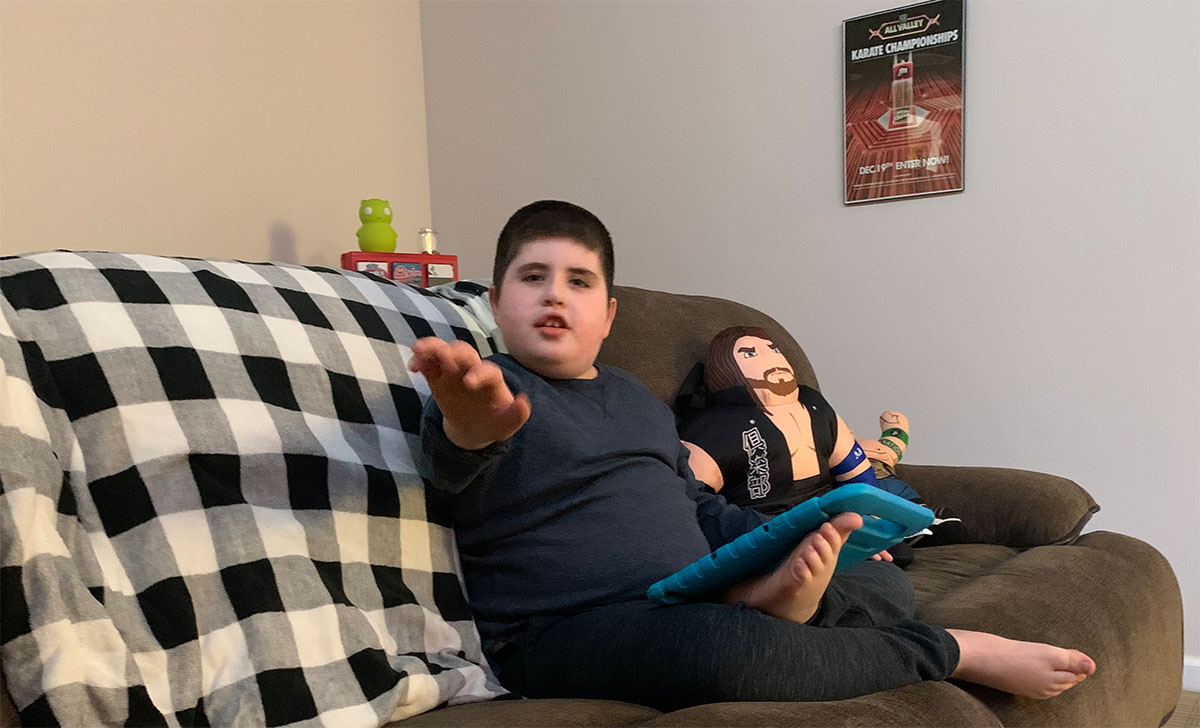 With a smile on his face, he will turn, wave to me, and laugh. How can you send this kid away?

His presence is alright with his sister too. In fact, it’s more than alright. It’s mandated. I once made the mistake of assuming otherwise and asked her, “Do you want me to bring Lucas upstairs to play on his iPad?”

My daughter was having none of it. In fact, she scrambled up from the couch, yelling out in a sing-song voice:

And it was another round of handheld hopping.

He stays as long as he wants to. The noises that I know might drive others insane have become the soundtrack of our lives. The clapping, yelling, and jumping are just part of who we are. We not only endure it, we relish in it. We want him in the room with us and, even if it leads to missing huge chunks of our precious television, we live in the future. TVs have rewinding capabilities. Whether he wants to participate in our activity or not, we just want him there. We just want him included.

WHY DOES AUTISM MAKE HIM DO THAT?

Get Your Copy of James Guttman’s Book – The Expectant Father’s Activity Book!