There have been people in my life who have hurt me. Whether strangers, friends, or family, it didn’t matter the role they played in my life. When someone does you wrong, they do you wrong. Whether they should or not is immaterial.

While these experiences aren’t necessarily unique, they were unique to me, just as yours are unique to you. I wore that pain like a badge of honor and let it harden me for all those who came after. Moping and miserable, I wanted everyone to know that I had suffered at the hands of someone else’s callous nature. What didn’t kill me made me stronger so, by showing that I had been emotionally damaged yet was still breathing, I felt I was declaring my strength.

In reality, I was simply declaring my vulnerability. I was demonstrating how people, even those without a strong presence in my life, could knock me off course and affect my way of thinking. My pain was a tattered flag in the air that I waved in the air for all to salute as my teenage angst stretched into adulthood.

In case you’re thinking that I’m exaggerating for the sake of exaggeration, you don’t have to look any further than the windbreaker I wore during the few years I wasted stumbling around a college campus. Proudly ironed on was a patch that read “All People Suck.” I guess it was important to me that strangers knew how I felt about them before we even were introduced. That was me, the rabid dog barking at all who approached, and then crying because people were afraid to pet me. 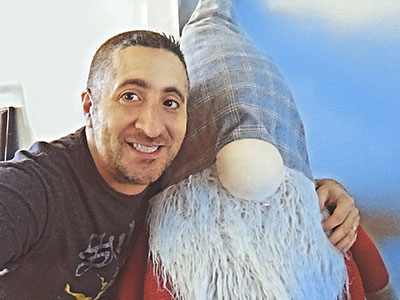 A few years ago, as my life began to transition from angry young man to grateful heart patient, I decided to put that thinking away. It all seemed rather silly. After all, my worry over being hurt had never prevented others from hurting me. So, what was the point? I stopped eagerly anticipating pain and searching for any way that someone had tried to cause me grief. My anger faded away and my guard was no longer permanently up. Since that day, I can proudly say that no one has ever been mean to me again.

If simply accepting other people without preconceived animosity stopped them from delivering on said animosity, everyone would do it. There would be no reason to write this because we’d all be shiny happy singing hippies, content with a world where no one does harm. No one wants to live with pent up frustration and anxiety. Who wouldn’t leap at the chance to let that all go, if it came with a guarantee that no one would hurt you ever again? It would be a simple decision. Unfortunately, life isn’t that simple.

The problem is that letting go doesn’t prevent others from still acting in the selfish and cruel manner that they sometimes do. Simply taking the high road doesn’t mean that everyone else will follow. In fact, I can tell you that they won’t. It might not happen as often, but people will still be people. People will still harm you and it still will make you want to hide away from the world.

That happens regardless of your preparedness. Despite all those years of going into every situation with a defensive posture, it never stopped others from trying to tear me down. Expecting people to upset you or not expecting them to upset you both have no real effect on whether they do. You can’t control other individuals any more than they can control you. You can only control yourself and how you handle it. Getting hurt is easy, not letting it change who you are isn’t.

All you can do is endure those moments of frustration or anger as they happen. Your blood might boil and your brain might pulse with anger. No matter what you do, it’s unavoidable and, as it’s happening, you have to deal with it. The globe is covered in people who love to push buttons and poke bears. For the time that you’re forced to interact with them, it can be maddening. Whether you choose to grin and bear it or chuck a potted plant at their head, one thing remains the same. The only time you must devote to it is the time when it’s playing out in front of you.

But then, it’s over. They’re gone and you’re alone with nothing but the unpleasant memory. It’s easy to spend the next 24 hours obsessing over the two minutes that annoyed you the day before. In some cases, those fleeting moments can affect who you are for the rest of your life. It happens to people every day. Little by little, the cynicism takes over. Before you know it, there’s a permanent scowl on your face and all your interactions are suddenly negative. That’s because positive people steer clear of growling grumps who proclaim that “All People Suck” as a fashion choice.

All people don’t suck. A lot do, though, but I refuse to let them burrow into my brain and set up camp. Instead, I accept that the world is a big place with all sorts of people in it. Some are good to have around me. Some aren’t. It is what it is. I can’t change them. I know that.

But I won’t let them change me either.