My daughter is 13 and it brings with it a varied array of moods. Sometimes she’s happy. Most times she’s annoyed. Always, she thinks my take on the world is a bit lame.

I’m not offended. In fact, I get it. At her age, it’s normal to think a man in his 40s, no matter how awesome he is, is lame. I full accept that fact and, despite that classic Simpsons episode which declared that “it’s lame to be proud of being lame,” I’m proud of being lame. I know. Lame.

So, what can I do? I can try my damnedest to make her think I’m cool, to no avail. I can make TikToks and wear skinny jeans and sing along with K-Pop. Look at me. I stan BTS. Daddy cool.

Or…I can do the fun thing and fully embrace the embarrassment I am. I can be mortifying more on purpose than I ever would be on accident. I wait until she’s at her most ornery and poke the bear for my own amusement. That’s the best time to do so.

As she’s grown older, some of the old tricks no longer work. So I found one sure-fire way to leave any kid her age with red cheeks and hands covering their face. It’s a simple process. I observe her annoyed look and take it from there.

What’s wrong with you?

Nothing. You’re just sitting there looking all annoyed. Why are you annoyed?

Oh…I know what it is.

She’ll turn to me with a grimace, prepared for the stupid thing I am undoubtedly about to say. I offer her my favorite retort.

I get it. You’re upset because you have the hot dad.

No. no, it makes sense. All your friends are always telling you, “My mom thinks your dad is so handsome.” The teachers at school are always asking you about me. It must be so hard. Kids can be so cruel. I wish I could do something to help, but I can’t help it. God made me this way.

Stop it. You’re not.

Thank you. You’re just saying that to make me feel better. I know how you feel. Actually, I don’t. But I could imagine. It’s your cross to bear. The girl with the hot dad. One day, you’ll be older and you’ll have kids of your own and then they’ll understand. You know why?

They’ll be the kids with the hot grandpa.

Bam. Mission accomplished. I love this approach. By the time I’m done, she’s hiding her grin behind her façade of annoyance. I’ve won the battle. I’ve won the war. Score one for the lame team.

This one goes hand-in-hand with another new one that I came up with to rip her from an aggravated mood. When she’s at her most unapproachable face, I’ll get all father-like with my wise old words of wisdom face. From above my glasses, I look down and say to her, “You seem annoyed. Don’t be. You know that old saying, right? Everyone says it.”

It’s worth it for the deadpan reaction alone. The first time I thought that one up, I was quite proud. Score two for team lame.

Another fun one? I ask her if she’s getting cyber bullied all the time. I know it’s a touchy subject and cyber-bullying is a real thing, so it’s important to ask at the right moments. I usually wait until her reasons for anger are apparent. A stubbed toe or a bad hair day can lead to an angry shout. That’s when Dad shows up with a concerned look.

No. I banged my foot.

They’re cyberbullying you because of your foot? It’s the only foot you have. That’s not cool. 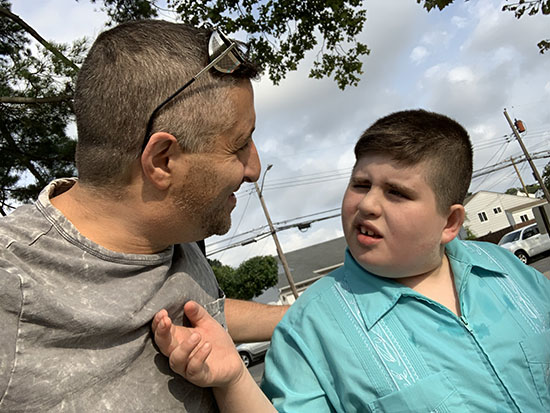 Luckily, this annoying approach to life isn’t limited to verbal 13-year-olds. It’s also useful for my non-verbal ten-year-old, whose autism gives my humor a more pronounced physical presence. Lucas and I have long had a history of humor built on me pushing his patience to the maximum point and then pushing it some more. While many others live in fear of him being on the brink of meltdown, I thrive on that brink. Sometimes it can be too much and cross the line to “stop” territory, but mostly it creates a belly laugh unlike any others.

Plugged into his Apple iPad, Lucas likes to be left alone. He doesn’t share screens or appreciate me even pretending like I am going to take it away. My mere presence alone rattles him up as he takes my hand and tosses it towards his door as a non-verbal way to say, “Eff off, old man.”

Then, I will turn my back, walk two steps, spin right back around, and come roaring back with a belly tickle. He loses it. It’s one of our favorite things and, the longer it goes, the more he pushes me for more and the louder he reacts. By the tenth turnaround, I’m dizzy and he’s not even holding the iPad anymore because he’s giggling uncontrollably.

His baths are the same deal. My little guy loves to run his hands under the spout. This holds true for any flowing water. Whether a sink or a wading pool, Lucas likes to casually let his fingers feel the drops as they fall.

If I place my hands near the spout, he quickly bats them away. Fearful that I could turn it off, he wants me far away from the flow. So, I remove my hands and loudly start what sounds like a sneeze.

Then, I place my cupped hand under the spout and with a boisterous “Choooo” shoot the water directly at him. He laughs his face off.

Well, except the one time I shot it directly in between his eyes. He flew back and I apologized profusely through restrained laughter. Truth be told, he laughed too as he wiped his eyes.

The moral of this story? Kids are annoying. So you have two choices. You can let them annoy you and feel old as they do or you can annoy them right back. Life is more fun when you practice the latter. After all, I’m the hot lame dad. It’s my job.

FATHERS GET TO BE CORNY