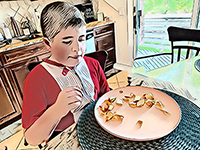 My daughter was just shy of three when my son was born. She was at the age where she wore butterfly wings made of old Amazon boxes and danced around the house. It was that age where they like to keep track of favorites to people. She followed our colors like a sports bookie follows the games.

He told you he likes yellow?

He’s a baby. How did he tell you he liked yellow?

Daddy. I just pick the colors.

Lucas’s favorite color, according to Olivia, changed a few times over the next few years. Eventually she stopped keeping track. She never explained if it was research for a book project or some secret spy mission. She just didn’t care about our favorite colors anymore. I guess mine is still blue.

My son is eight now, but since he’s non-verbal, he still hasn’t been able to claim his favorite color yet. He can usually identify them on his iPad, but he can’t really distinguish “favorite” as of now. He will eventually and, if not, my daughter will just assign him one. It’s all good.

I assigned Lucas some favorite things too.  As my captive audience, I was able to claim my homemade pizza to be his favorite food. It’s something I’m proud to make and proud to serve. Although, it’s always a much bigger hit in my brain than on the table. Olivia’s fondness for my pizza has had its ups and downs, but overall, she can take it or leave it.

To me, though, pizza-making is a huge deal. I really go all out with this thing. Starting at flour and following through to the finished pie, I wax philosophic about the wonders of creation as I sprinkle cheese to Louis Prima playing on my phone. It’s a whole thing. It’s my favorite. Heck, you know what? It’s Lucas’s favorite too.

That’s right. Pizza night’s his favorite night. I claimed it. Every time I made pizza, I announced that I would be making it for Lucas. I even did a special pizza on his birthday. Why not? It’s his favorite dinner. I told you. Just like yellow was his favorite color.

Of course, he didn’t tell me that. Also, he never really chose pizza over anything else. I had to have actually made it by the time he pointed to it. It was just food ready and waiting, so he grabbed it. There was no picking involved.

Sure, sometimes, he would point to a picture of pizza on his PEC board when I’d bug him before dinner during a Sesame Street viewing. But there also were times that he would point to anything to get me out of his face. If I went by the PEC board some days, he’d eat the Wiggles.

Still, deep down I knew it. Pizza’s his favorite. I could feel it in my bones.

Eventually, we made our way to today and his communication iPad. I can tell you now with certainty that I was right. Pizza is his favorite.

I know because upon learning that he could use this device to get exactly what he wants, he’s become the happiest pizza guy on Earth. He has discovered that, yes, there is a half-ton of apple juice along with cheese, sauce, and bread in this place and it’s all a button away.

He has juice on auto-dial but pizza – that’s the big one. It’s his biggest request. Breakfast? Pizza. Right after breakfast? Pizza. Stepping out of the bathtub? Pizza. This kid loves pizza.

I’m totally taking a victory lap on this. While I guessed that he liked pizza, though, I had no idea he was as in love with it as he is. He’s a total groupie –  one of those people who should buy pizza merchandise like T-shirts and meme posters with little pies dripping cheese alongside captions like, “What A Cheesy Day!”

The more he has learned to use his communication device, the more he has been seeing it as an easy way to score this cherished meal.  His therapist was here for his most valiant attempt.

I was in my office, just around the wall, and could hear them working when his computer voice spoke out.

That’s good. Let’s go get Dad and tell him.

I knew we didn’t have any pizza. When they came to get me, I told them we didn’t. But, since he asked, I wanted to find a way.

We went upstairs and the two of them sat at the table. He waited patiently as I took a burrito wrap, covered it pasta sauce and cheese, microwaved it, and served it like some ghetto garbage your kid makes you eat as a joke. It was “pizza” with extra quotes.

He ate the whole thing in five minutes. It was pretty darn close to pizza, if I’m being honest. It didn’t look darn pretty, but it tasted good. I had declared myself the king of both authentic and ghetto fake pizza. That’s when he asked again.

He looked up at me from his seat. I wasn’t giving him another one. It wasn’t even real pizza.

How about something else, buddy? No more pizza.

That’s when he turned his attention back down to his iPad, raised his finger, and brought it down.

I felt an audible “aww” in the air. I’m not sure if it was his therapist, me, or the universe. Either way, that kid got another Fugazzi pizza.

I’ll make him pizzas forever. I knew he loved them before he was able to tell me. I want him to be able to tell me everything he wants one day in whatever way possible. Today, it’s pizza. Tomorrow, it’s the world.

And pizza. He’ll probably ask for pizza with it. But the world too.