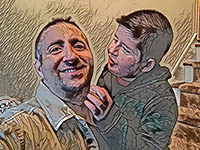 I have been carrying on conversations with my children since they were both infants. Almost immediately upon their arrivals, they each became a captive audience for me to teach, talk to, and just babble on about whatever came to mind.

It gets you some weird looks at the supermarket. Pushing a cart down the aisle while a baby, in the babiest sense of the word, trying to balance their head while you discuss what type of pasta to buy.

I’d then toss the box into the cart, navigate my way around the lady giving me the “what the frig” stare, and go about my business.

Babies don’t care much for parent babble. They seem more interested in the world around them. My daughter would bob her head along, staring at the bags and boxes on the shelves. It wasn’t until she started to get a bit older that my words started to stick. She understood most of the things I was saying at her and she showed me she was listening. Soon, she was talking back. 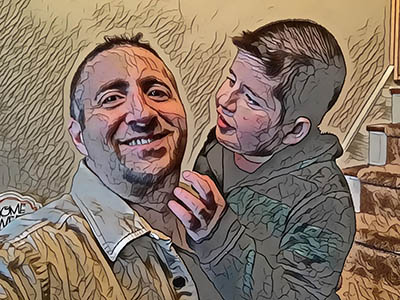 My son, on the other hand, didn’t go that route. In fact, after he was diagnosed with Autism, my head told me that he would never crossover from that apathetic point. To me at the time, Autism meant he wouldn’t have interest in people or the things they had to say. From what I had seen on TV, he was going to like lights and reject hugs. My whole outlook on this person, who was more important to me than any other guy on Earth, was based on stereotypes from 80s movies and after school specials. I didn’t realize it then, but I do now.

For some reason, I kept talking at him though. I told Lucas everything. If I was mad at someone, I’d complain to him about it and give him all the details. Sometimes he would look at me. Sometimes he wouldn’t. Still, I’d go on and on about what this person did or what that person said all while he’d be clapping over a musical toy or pressing buttons on a Leapfrog laptop.

I didn’t just toss speeches at him either. I tossed songs too. Lucas has few specific loves in this world and one of them is Raffi’s 1984 concert for Young People. He has seen the video so many times that I can recite it from memory.

I mean it. I recite it from memory. I do the ad-libs Raffi throws in the middle of songs. I do the jokes that he sprinkles in between. Heck, I even do the audience reactions. There are a ton of them in “Something In My Shoe.” I memorized them all.

For literal years, Lucas has heard me sing him that song in the exact way Raffi does on that video. I emphasize the same syllables, deliver it with the same tone, and even the part where he cracks a joke and a guy in the audience lets out a loud “ho ho ho” like Santa Claus, I do that too. I sound just like him.

It began as a way for me to occupy my brain during his younger days. I can remember singing to the back of his head as he would run off to clap or play something else. It wasn’t until I started turning these songs into a full contact event, complete with surprise tickles and scooping him up, that he even started to show a spark of interest.

Suddenly, he was giggling when I would do the Something In My Shoe song. He anticipated the upcoming parts and knew when I would be ramping up for a funny line or a belly poke. It kept building and building until one day, it was no longer my thing. It was our thing.

I can remember the day it happened too. Since he’s non-verbal, Lucas’s favorite way of getting your attention is to tap incessantly on your arm and then take your hand to whatever food he wants to eat. This can be maddening. A lot of the day is spent either saying, “no, we’ll eat soon” or “dude, you just ate.”  That’s what I thought he was doing when he wrapped his fingers around mine while I was typing on the computer.

Depending on my mood, his insistence can be annoying or adorable. This day, it was the latter, because I got up and allowed him to lead me into the living room. That’s where he brought me to the couch and sat me down like a pint size maître d at a five star restaurant.

I took a seat and looked up to see Raffi on the television, just about to start “Something In My Shoe.” I then turned my head to see my son, staring at me with a giant smile. I knew what he wanted. He wanted me there for our song. The two of us rocked out to the Shoe song like it was magical.

Today, Lucas and I still sing this song on a regular basis…along with “Brush Your Teeth”, “Peanut Butter Sandwich”, and all of Raffi’s 1984 Best-of Hits. I’m glad I never gave up and I kept pushing forward. It reminds me that even today, my boy still has a lot of surprises up his sleeve. If I never give up, neither will he. I used to believe that could be true. Now I know it is.