Yeah. The coronavirus has us all locked indoors as the abnormal slowly starts to become our new normal. It was just about a week ago that I would kick myself for not going out more. I’d say things to friends like, “Ugh. I feel so lazy. I haven’t even left the house today.”

Now, I’m not supposed to. None of us are. If you leave your house, there are people in facemasks and lines wrapped around the gun store. I keep expecting Roddy Piper to walk by in sunglasses.

What that means for my house is that the walls now have footprints from my kids bouncing off ‘em. We’re keeping busy, getting imaginative, and slowly learning that most of the things we forced ourselves to put clean socks on for can be done via the world wide web. School became a long-distance event pretty darn quick. It makes all those early morning near car crashes outside the drop-off door seem a bit pointless in hindsight.

The biggest concern here, of course, was my son. Lucas has autism and is non-verbal, so every slight alteration to our lives becomes an issue that makes us worry about him first. Even though he eventually knocks his challenges out of the park, it takes a few swings of the bat. Also, moments like this must be confusing to him.

It’s not like I can sit him down and say, “Sorry, buddy. We have to stay home because people won’t stop going to Red Robin during a pandemic.” I can’t show him videos about the misinformation regarding the virus to ease his mind like I do for Olivia. He can’t even talk to his teacher over the phone because, well, she’s not Elmo and he won’t stare at a screen unless a Muppet, the Wiggles, or Raffi are on it.

So, we make do. Luckily, Lucas isn’t overly influenced by routine. I say that knowing full well that he’s probably more influenced by it than most children his age. Compared to the stereotypical view some might have of children with autism, though, he isn’t. Sure, he likes to do things at certain times, but he’s pretty cool with getting things when he gets them.

There are, however, a few exceptions to this rule. For example, wake up time is 6:30. Every day.

It’s easy to overlook this during the school year because he needs to be up at that time anyway. I don’t even set an alarm. He’s almost always clapping me awake and throwing toys over his safety gate to get my attention. My wake-up call is the crash of jack-in-the boxes slamming into our wood floors, followed by the slow creak of him sliding it back under the gate from the hallway and then doing it again. Needless to say, my alarm clock might not be a clock, but it’s alarming. 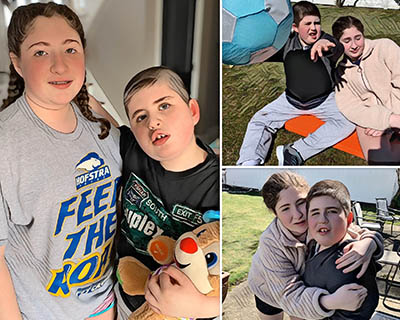 That’s his rise and shine routine every day. It’s not just weekdays, but weekends, holidays, birthdays, vacations – you name it. Some people crash at night. He crashes at 6:30 AM…literally.

So, we’ve kept that routine going. Sure, I will sometimes toss him his iPad and let him watch TV until I roll out of bed, but I’ve tried to keep those moments sporadic. Soon enough – fingers crossed – school will be back to normal. When that happens, he’ll have to know that his mornings won’t begin with two hours of Youtube Kids videos being started and stopped repeatedly. He’ll have to get up, eat, and go about his day. So that’s what we’re trying to do.

He eats all his meals at the same times. Both kids do. Between all that, he has only one real demand. He likes to be entertained. His favorite thing, as I mentioned, is video entertainment. So that’s usually first on his list. Whether his device or our television, he’s just happy to have something to jump and cheer to. Normally, it’s just available in short spurts, but now, he has free reign to watch at will. It’s starting to get a bit old, though. Surprisingly, he’s started to notice too.

No one could be happier about that than his sister. Olivia, the other half of my wall bouncers, is constantly trying to find ways to get her brother to play with her. He’s usually less interested in going outside to play ball, tag, or anything structured than he is with watching a screen. It leaves her frustrated and I tie myself in knots trying to make it work. It’s lead to some tearful games of catch as he angrily throws a beach ball at us in order to offer appeasement.

This week, though, has been easier than ever. With so much screen time available, Lucas has been more open to taking breaks and playing with us. It has produced smiles, laughter, and more pictures than I can post here. I have been blown away by how this event, which has limited what most of us do with our days, has showed him that there’s much more to do than he ever realized. Once again, I learn about the world through his eyes in ways I never would have noticed on my own.

We all lament being locked in together during this pandemic. We joke about the insanity of nonstop family and, while that is true a lot of the time, it can also be a blessing. We’ve been given the opportunity to stop and take a breath and appreciate the people around us. In a world where we are constantly on the move, for the first time ever, we have nothing but time.

Look, I’m not pretending this is all fun and games. It’s not. It is, however, a reality. Being miserable about it will only make it pass slower. Sometimes you have to look for silver-linings or draw some rainbows or something. Whatever keeps you moving forward, do it. What else is there to do?

Try to enjoy these time-out days. They won’t last forever, no matter what they tell you on the news. When they’re all over, we’re going to remember this abnormal time for the rest of our lives. Once all our routines return to normal, as crazy as it may sound, there will be moments when we think back to these days and miss them.

We won’t miss the fear, panic, or confusion. But these days of forced family time together will be something we don’t fully appreciate until they’re gone. In the midst of all this uncertainty and chaos, it’s the only thing I feel like I really know for sure.