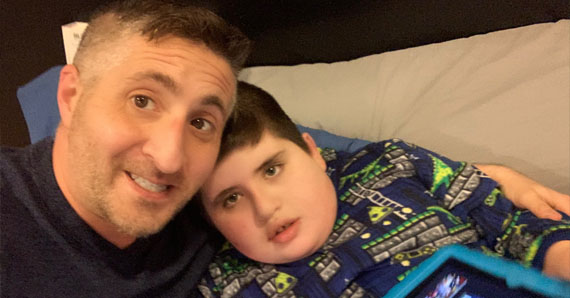 I recently spoke to a person who had fallen out of contact with our family many years ago. There was no major issue or knock-down, drag-out battle that led to the divide. People drift. Times change. Plus, if I’m being honest, she was always a bit abrasive.

As we spoke, I let her know that there had been no major factor that led to the split. In fact, it was confusing to me too. Time just pulls people apart.

She had been thinking about it during the years away from us all too, but had pondered it on a deeper and more surprising level. She had her own theory.

I thought that maybe it was because of Lucas.

Hmmm. OK. My son is non-verbal with autism. He doesn’t have words and, if he did, he probably wouldn’t tell me to not talk to this lady. I didn’t know what she meant. Luckily, she explained further.

Well, our kids are around the same age and I remember that when they were little, my son had some delays at first too. Then he grew out of it and, you know, he’s doing so wonderfully now and all that, so I thought maybe that was why. Jealousy or something.

Pause. Stop. Let that sit for a second.

The problem with unexpected statements like that is that they’re insidious. They snake their way into your brain, rattle around, and build up over time. The immediate response to a left-field piece of speculation of this caliber is almost automatic.

That’s not it. No. Not at all. I can pretty much promise you that.

My instinct upon hearing such a thought is to shoot it down. Rather than analyze the words she actually said, it felt more about pointing out how it is untrue. I want to be clear that I’m not the type of person she had been assuming. No one in my circle is the type of person she had been assuming. We would never cut contact with someone because their kid doesn’t have autism. That’s an awful thing to think, an awful thing to do, and an awful thing to say. Once you do squash the misconception, that’s when you can focus on those words.

So, as the conversation went on, they kept popping up in my brain. She droned on and on about whatever and I started to think more and more about it as she did. Unfortunately, we had pushed past that incredibly rude, yet mostly unintentional offensive, statement. To circle back ten minutes later would be a case of “he doth protest too much.”

So, I guess I can circle back now. Allow me to be clear about one thing. In a world where choice is an option, I choose my kids every time. I get how this woman, like so many others, doesn’t fully get that fact. Many know Lucas from stereotypes and his noticeable differences. They don’t understand our bond. The relationship I share with my boy is unlike any other I have with anyone else and few, if any, can really understand it without being in a similar situation themselves. It’s more special than I can even describe and this blog, since the day I started, has been focused mostly on trying to explain the unexplainable. He, along with his sister, is my everything. I get to experience a profoundly unique relationship in my lifetime and feel lucky to do so.

Here’s the irony of it all. Let’s say I had to choose my a kid. Say the universe passed some weird law that mandates all parents to choose their own offspring from a pool of children. It’s some sort of buffet of parenthood and all the kids of the world are on the list of choices. The only caveat – you can’t pick your own kid.

I know, it’s an involved scenario, but play along. Pretend that’s a rule.

If that was the case…I still wouldn’t choose her kid. I didn’t like her kid. Her kid was kind of a doofus. No offense to any doofuses out there, but it’s true. He would parade around being all doofy and I’d watch, with an upturned eyebrow, and be silently grateful that my children weren’t like him.

Yet, for years, she not only sat there thinking that we wished we had him instead of our own pride and joy, but felt that she could say that to me and I would be like, “Yeah. Totally. That’s why we stopped talking to you. We wanted your child instead.” It’s as if she never took a good look at the global roster of humans. Plenty may speak, but plenty also stink. Just because someone has the ability to say words, doesn’t mean they should always be speaking.

No, lady. It wasn’t your kid. Maybe part of the reason we wished you into the cornfield is because you are the type of person who would repeat such an offensive piece of stupidity back to me, completely self-unaware of why you probably shouldn’t.

The bottom line is that my kids are the best – both of them. My neurotypical daughter is smart, witty, kind, and caring. Even on the cusp of the terrible teens, she’s still all I ever hoped she would be. I’m prouder of her every day.

As for my son, he too is the best. I don’t mean that in one of those ways where I’m trying to convince myself he is. It’s not like I’m standing in the middle of a burning building, tears streaming down my face, and crying out, “It’s fine. It’s fine.” No. This is legit.

It’s legit because, just like his sister, he has a list of wonderful traits. My son is one of the most loving people I have ever met and, with his autism, he is even more pure in his approach to the world. For every word he doesn’t say, there are one hundred kind and sweet things he does for the world around him. His teachers send me notes about how sweet he is or how hard he tries. He greets me with smiles and offers hugs for no reason other than that he loves me and is glad I am there. It’s beautiful and it’s perfect. He’s always there when I need him the most, needing to do nothing more than be himself.

Would I want him to be able to learn verbal language so that the rest of this somewhat cruel world could understand him better? Sure. Even with the leaps and bounds he takes, do I still beat myself up when I don’t do more? Yes. Do I want to carve out the easiest life ever for him, just like his sister, and take away every ounce of pain he has? Absolutely.

That’s the only issue I face with my special-needs child’s special needs. It’s not even something specific to special needs. I wish the same for my daughter. I want to make her into all the things I that I wish I could be and, when I can’t lead her directly to the path I want her on, I sometimes get on myself about it. It’s the exact same thing. It’s parenthood.

So, thanks, but no thanks. Keep your kid and I’ll keep mine. You don’t know what you’re missing.