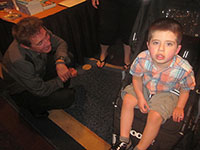 When my daughter was about five years old, we took her to a Brady Bunch convention in New Jersey. It had become one of our favorite family shows and when I found out there was an entire event one state over dedicated to the program, I jumped at the chance to bring the family there.

The convention was loaded with stars from the original cast and the follow up movies. Olivia, who the entire outing was planned for, immediately became overwhelmed and said barely a word while we were there. Lucas, who was very early in his Autism diagnosis and non-verbal, just as he is today, happily let us stroll him to and from each actor.

When we reached the table of Barry Williams, the famed Greg Brady, we all made small talk and tried to coax Olivia into taking a picture with him. She nervously and unexpectedly refused. So Barry, in classic Greg form, came around the table and tried his hand at Lucas.

He smoothly took a knee next to my son’s stroller in a way that we would later joke was like saying, “Hey there, groovy guy, you’re far-out in a happening kind of way.” He smiled a slight grin as the other doting convention-goers swooned with a sense of nostalgic enamor.

Lucas never made eye contact with Johnny Bravo. Nope. Instead, he poked his head out from the carriage and stared directly at me. If he had words, they would have been, “Yo. What exactly does this dude want from me?”

And that look – that Yo, Daddy, you know this guy? look – became the theme for so many of Lucas’s interactions with childhood celebrities. From Elmo to Chuck E. Cheese to giant waving Hershey Bars, my son has given me that same expression. In a world where everyone is trying to keep up with a Kardashian, my little man doesn’t even want to look at a Kardashian.

Disney is the best place for these blow-off moments because much of the staff there seems to be aware that it can happen, so they come prepared. There was the Mad Hatter, who looked on as Lucas swiped iPad apps during our Unbirthday Breakfast. There was Rafiki from the Lion King, whose name I say confidentially but only learned five days ago, who would point in the corresponding directions that my son was looking so the pictures seemed like they were sharing a moment. My personal favorite this trip, though, was Snow White.

Breakfast meet-and-greets are especially hard for my son because they require ripping him away from food. While everyone else hops out of their chairs for big hugs and silly poses, Lucas is just looking to get his hands on some more muffins. It doesn’t matter whose they are. Your muffins, my muffins, a stranger’s muffins – they’re all Lucas’s muffins.

Snow White was on point, this morning. She had the tone and cheerful nature down to a science and that’s why I didn’t feel weird about asking her to take a photo next to Lucas’s chair. What followed was me singing the native song of my son’s picture taking.

Lucas. Look up here. Lucas! Look at daddy. No, no, no. Leave that. You’ll have bread after. Lucas. Look here. Look. Over here.

Of course, during all of this, I’m snapping pictures wildly because it’s 2018 and you don’t have to pay to have each one developed anymore. So, with my son, I take about 20 of each shot. Basically, I’m a fashion photographer in an ’80s movie. Through the barrage of clicks, I finally removed my gaze from Lucas and glanced up at Snow White, who I expected to be smiling like the cover of a Little Golden Book.

Nope. She had a big pout on her face and her arms scrunched up in a pose that made the entire picture go from throwaway awkward to perfect for framing. The surprise of it all threw me back.

Oh my God. I wasn’t even looking at you. That was great. Thank you!

Hrmph! Grumpy always ignores me. We take our pictures like that.

Told you she was on point.

She had it better than Sleeping Beauty a few minutes earlier. As she was doing some shtick about waking up early for breakfast, Lucas forcefully reached around her gigantic dress in order to tap my wife’s arm to get him more bread. The huge pink ruffles all started shaking and when you looked down, you could see his little hand followed by his concerned face on the hunt for carbs. If this woman had been the real Sleeping Beauty and my son had ridden by during her enchanted forest slumber, she would have stayed asleep forever and he would stopped just long enough to steal all of the Ritz crackers from her pantry.

That’s not to say that we don’t have smiling pictures with people in character costumes. We do. It’s just that the characters aren’t the reason he’s smiling in those pictures. To Lucas, there are only a few people he throws his arms out for. They’re all people he knows personally.

We’re his celebrities. What almost all of those doomed photo op stories have in common is that he’s blowing off a big star so he can interact with a loved one in his life. It’s not that Lucas has no concept of people. It’s that his concept of people centers around the people he cares about, not the ones he sees on TV. Once again, his Autism, which so many see as something that keeps him from being like everyone else, actually gives him a perspective on what’s important that everyone else strives to achieve.

These seemingly “ruined” photos used to cause me grief. Now, I see them for what they truly are – validation that every happy smile for me is for me alone. I’ve earned it – not by being a character or a star. I earned it by showing Lucas every day how much I love him. That’s the smile that matters the most.