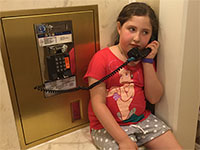 Usually when you hear someone say, “In my day, we didn’t have internet, we had…” it’s followed by a boring activity. There are marbles or stick bats or some other primitive game accessories that makes today’s generation wince in disgust.

Not this time, though. Because, in my day, we didn’t have internet. We had prank phone calls and they were awesome.

We would all gather around the corded landline in the basement and begin punching in random seven digit numbers until someone answered. Usually, we never planned what to say ahead of time so we always ended up doing a deep voice and saying something like, “Uh. Hi. Haha. Is Billy Butts there?”

When the confused answerer would respond with a “no”, we’d laugh, yell, and hang up. This was some riveting stuff, kids. It went on for hours and, since caller ID was still years away from being rolled out, very few people could track you down. 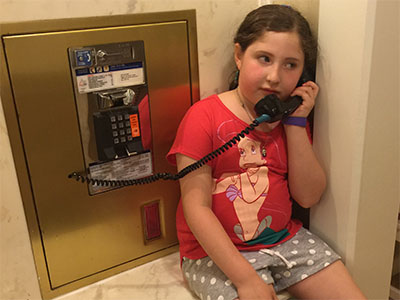 We weren’t making obscene or threatening calls, just childish nonsense that, even to a child, was obviously childish nonsense. Yet, the grown ups who picked up would get so worked up that you’d think that we had firebombed an orphanage. It took next to nothing to send these adults, through the phone lines, into a ranting and raving fit. They’d demand to speak to your parents, threaten to call the police, and, in one strange instance, even begin chanting bible verses. As a child, I remember thinking that most people over the age of 30 were living on the edge of sanity with just a slight nudge being all it would take to send them into a dangerous tailspin. It was a pretty terrifying world view.

As the decades of my life flew away, so did the days of prank calls. Today, phone calls aren’t anonymous. In fact, nothing is. The only way you can really get away with making a prank phone call would be by finding a pay phone and, much like the decades, they too flew away. Walls that once had rows of telephone receivers now have, well, nothing. It’s just those blank metal plates reminding you that Ma Bell has moved on.

That’s why I couldn’t believe my eyes when I saw a genuine working pay phone inside of a Disney World hotel back in 2016. It was like finding a dinosaur bone at Chuck E. Cheese. As my then-wife wheeled Lucas around the boardwalk, I directed Olivia straight to this mystery contraption from the 1980s and explained the insanity and majesty of calling random 800 numbers. There wasn’t much to tell, but she was hanging on my every word and practically taking notes.

You hold the phone up to your ear and wait for them to say hello. Then you just act all crazy. I’ll think of a phone number you can call.

I pressed the buttons on the phone and watched as Olivia clung to the receiver with an ever-evolving face of glee. With each passing ring, her smile grew slightly bigger. Finally, her face beamed with excitement. Someone had picked up the other end and she shouted…

Where is Joe?! I want to order cable! Come install my cable!

I was watching my child have one of the top five greatest moments of her life. Suddenly her eyes started darting left and right and she began answering questions.

I reached over her head and clicked the metal flap to hang up, out of fear that she was being cursed out. Although, to be honest, that’s a right of passage for any seasoned pranker.

What did he say to you?

Joke’s on him. Your dad dialed the phone! 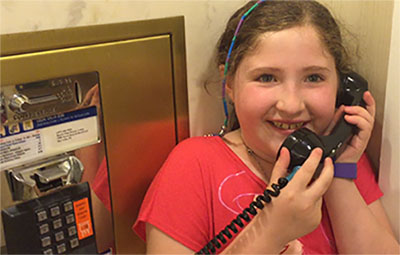 We were both laughing like crazy. However, this whole activity was obviously inappropriate so I did what any other responsible dad would do.

I dialed the number again and handed her the receiver.

She was in hysterics as it rang and, as luck would have it, that was the moment the other half of our family returned from their stroll. Seeing our daughter on an antiquated telephone, my wife asked what was happening. Unfortunately, the carpet guy answered before I could because, as I started to explain, Olivia raised her hand in the air and began to shout.

First of all, do not hang up on me! Second of all, I can count to one hundred! One…two…three…four…hang on, I’m still counting…five…hello? D’ja hangup on me?

Then she doubled over in laughter. It was a great moment in prank phone call history.

When we got home, she told everyone who would listen about her phoned-in rampage through a carpet company. It was, easily, the highlight of her 2016 Disney World trip.

You read that right. It was the highlight of her Disney World trip. Not Mickey. Not Donald. Not Darth Vader. Nope. It was the free prank phone calls.

Look, I know it’s childish and I know that parents aren’t supposed to encourage those things. I also know that some of my favorite childhood memories involve calling the bowling alley to inquire about the weight of their balls or calling your friend five times and asking for Tom, before making a final phone call of, “Hi. This is Tom. Any calls for me?” I laugh in my head just thinking about them.  I wanted my daughter to have a memory like that too.

When we returned to Disney last year, the pay phone was gone. It was replaced by one of those blank metal plates and, unfortunately, we didn’t get to reconnect with our carpet buddy. Just like her dad, Olivia’s prank phone career will have to live on in memories.

When she looks back, adults won’t be limited to the seething rage of those who answered the phone. She’ll remember that her dad, a card-carrying adult himself, was by her side laughing the whole time.