We all went out to dinner last night. The restaurant was pretty much empty, which is never a good sign in terms of cuisine quality. It’s always a welcome sight for us, however, as it means that Lucas can loudly clap to his heart’s content.

Being non-verbal with Autism, my son can sometimes cheer with excitement during some pretty inappropriate times. Whenever we’re in a place where quiet is expected, we try to help him give others the respect they might expect. In this case, there were no others to worry about, so he was free to do his thing.

Truth be told, there hasn’t been as much screaming to worry about lately. At eight years old, Lucas isn’t the boy he once was when it comes to outbursts. The days of leading him out of quiet concerts and award ceremonies because he can’t control his jubilation might not be entirely over, but they are few and far between.

Not only was his volume appropriate, but he also was able to sit calmly. Often resting his chin on his hand with a pensive gaze, my little guy wasn’t trying to escape the confines of our booth. Just a few years ago, that would have been unheard of. In fact, all of our food runs from that time were literal. There was food and there were runs. It was our job to stop him from disappearing from the table in a true case of “Dine and Dash.”

That doesn’t happen anymore and because of it, I no longer have to be sitting immediately to his side or attached to his hip for all of our public meals. He can have his own seat, across from me, like a big boy. It’s a proud achievement and one that, just a year or two ago, would have seemed comical to imagine. 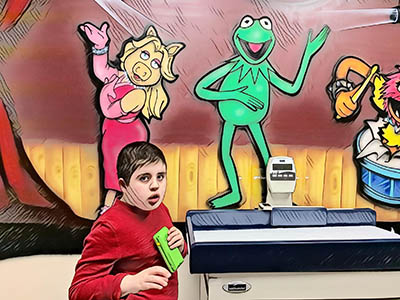 I’m not being glib either. The thought of Lucas following directions on his own brought about literal laughter. When he was younger, there was a trip to the pediatrician that often replays in my head to remind me of how far we’ve come.

My son was around five or six at the time and our doctor had made us wait in the tiny exam room for, what felt like, an eternity. By the time he came in, Lucas was all revved up with nowhere to go.

The doc ignored my little rambunctious ball of energy and, with his clipboard in hand and his shirt buttoned one button too far, started down the list of “does he, doesn’t he?“. That’s when he asked me a question that I’ve never forgotten.

Does he help you get him dressed in the morning?

Still watching Lucas run around the room from the corner of my eye, I distractedly responded.

Well, yeah. I mean, he doesn’t pull his arms away and stuff.

That’s not what he meant.

That’s not what I meant. I’m not asking if he fights you. I’m asking if he helps you by putting his clothes on by himself.

And then, I replied in a way that showed Dr. No-Buttons that we were on two very different pages.

I laughed in his face.

And he stared blankly. He wasn’t kidding. I regained my composure.

It was such a ridiculous question to me, at the time. Help me? Yeah, dude. He helps me get him dressed. Then we do quantum physics and build a go-kart. The thought of my boy, the wildest of the wild children, helping me dress him in the morning was comical, at best.

That was then. Today is now. And today, that impossibility has become a realistic part of our routine. I gather up his clothes before school and he stands in front of me. I hold out his pants and say.

He puts his leg in.

He puts his head in.

Well, you get the idea. The impossible has now become more than possible. This thing that I found laughable in the face of a medical professional became a regular part of our day. Do you know when this happened?

That’s the way it should be. My boy is in a constant state of forward momentum. Because of that, it can become easy to get trapped in a depressing loop of perceived failures. Since it feels like we’re always trying to help him reach a goal that he hasn’t yet mastered, it’s easy to accidentally overlook the ones that he has.

So, staring across the table at a sushi place as my little guy slurps up noodles and crams dumplings in his mouth might be another day at the restaurant for most parents. For us, though, it’s progress. It’s a sign that we’ve made some pretty amazing strides. Yesterday’s impossibilities become today’s milestones before our very eyes. If you’re too busy worrying about tomorrow’s goals, you’ll miss them.