Parents are used to being understood. For many of us, it takes a stern look or the underlying threat of “no Playstation” to put some fear into your kid. It helps to stop the insubordination and keep the ship running smoothly.

That was me. Sure, I rarely had to break out the ol’ side-eye to knock my kid back in shape, but it came up now and then. My daughter was always pretty good and it takes very little to get her to follow the rules. I was lucky in that sense, but still, the three count always got things moving.

Then, my son arrived and he blew all of that to hell. 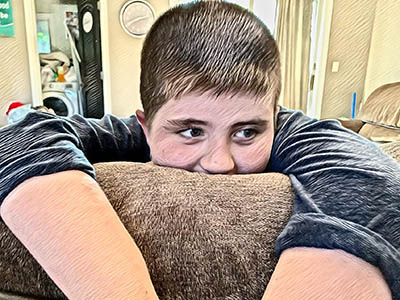 Lucas is non-verbal and his autism can sometimes cloud whether or not he understands the words I am saying. When he was younger, it was hard to know if my point was getting through. As he’s gotten older, though, it’s become clear that – yes – he gets it. And – yes – he’s going to do whatever it is he is doing anyway.

We have had many interactions that involve me telling him, beat-by-beat, to not do a certain thing while be proceeds to do it in my face with little care for consequences. Seven in the morning, he will stand up, mere feet away and begin to inch towards a piece of candy on the table. So, I will do the Dad.

Undaunted, he continues to inch his tiny feet over. Shuffling slowly as he does.

Do you hear me?

Shuffle. Shuffle. Worse? He’s making eye contact the whole time. His gaze is fixed on me as he reaches out with his hand, picking up the candy. I feel like a clueless housefly, staring as he, the human, reaches for a swatter. Idiotically, I begin counting.

And I’m left sitting there powerless. I’m inconsequential. Eventually, I stand up in a huff and take the remaining treat from his hand. He lets out a loud whine and an angry look before collapsing back into his chair where the whole standoff began. I try to explain as I put it down on the counter and start to walk away.

No. Lucas. No candy. It’s too early.  You have to listen to Daddy. You have to…what are you doing? No. Sit down. No candy. Lucas! One…two…

There is no talking him down. No threats. No bargains. No nothing. If this was the Old West, such an act of disrespect would lead to a high noon duel at the town saloon.

But this isn’t the Old West. There is no duel. Instead, I have to serve him breakfast. Nothing knocks you down a few pegs quicker than that.

The fact of the matter is that he’s not being bad or naughty. Naughty would imply that he’s trying to get away with something. Lucas doesn’t try to get away with anything. He’s not slick or sly. He’s in-you-face about his attempts to get his way for little to no reward at all. It’s an impulse that, as frustrating as it can be for me to endure, I know he often can’t control.

There have been days where we try to keep his stimming iPad away from him. While it is easily his favorite toy, too much can be too much, and he needs a break. There are times though, when my boy will have none of that. He’ll battle an army of robot bears to touch it for a mere minute. Seriously.

You can be holding it in your hands and he will physically lunge for it as if he is in the Superbowl. You can hear the announcers screaming, “Guttman with the catch!” He tumbles to the ground grasping it and feverishly swiping the screen, all the while knowing I am going to snatch back immediately. This whole act of disobedience was done for three seconds of iPad time.

That’s how I know he’s not doing it because he’s spoiled or bad. He’s doing it because he can’t control himself and, as foreign as it feels for a father in that moment, I have to be patient. You can’t flashback to the olden days of iron fist parenting, declaring total rule over the house. You can’t put the fear of God into him. You can’t yell, scream, or take things away. You have to show care and teach him on his terms. Otherwise, nothing will get solved.

I also know this because, in these moments, he’s his most vulnerable. He cries much easier when overwhelmed by these urges to get what he wants and, if you focus on him rather than your own frustrations, it can break your heart. I can’t let him just have it, but I also can’t treat him like I would another child who’s disobeying me due to a lack of respect. That’s not what this is.

Parents to children on the spectrum know this difference and, if they don’t, they need to. It’s not easy to go against every internal parenting instinct you have. When everything in your body screams, “put him in the corner”, you need the knowledge to know that’s not the right move. You also need the strength to follow through.

That’s not to say that I don’t get frustrated. I do. I know others in my position do too. I’m not perfect and neither is he (adorable face notwithstanding). We all have our times of self-doubt and, just as he flies through the air to steal a Snickers from my hand, I have moments where I need to sit down and get my head together too.

But he’s as forgiving of me as I am with him. He might get angry and he might throw a fit, but he’s always back to hugging me within minutes. To be honest, I am too. We get each other. That’s how I know that even on days where an Old West duel might be in order, we’re going to be just fine by breakfast.