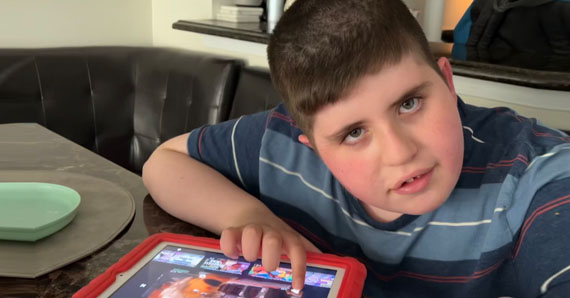 I know that many people have a difficult time understanding my non-verbal son with autism.

That’s not meant strictly in terms of communications. Knowing the reasons behind his actions and why he reacts the way he does to certain things isn’t easy for most to figure out. This is true for people close to him and those who deal with him in passing. For the most part, Lucas’s responses to certain situations can be perplexing.

One example is the way he handles certain video clips, which he insists on rewinding and rewatching. One of his favorite YouTube movies is a Sesame Street compilation that he plays on repeat, starting and stopping it with glee. To watch him is to see pure joy. He will even come over and tap you to partake in his happiness.

However, it all changes in the blink of an eye when the Goo Goo Dolls pop on to sing a song about pride with Elmo. That’s when my son completely loses it.

Tears, sadness, and howls of unhappiness all infiltrate his happy viewing. It took a while to realize that it was this particular part of his video which caused this distress, rather than it being random. Even more confusing is that he will skip back in the video to watch it again, lengthening his own agony.

Do you know why it makes him cry?

Oh, that’s not a rhetorical question. I wasn’t saying it to set up my grand reveal of knowledge. I’m genuinely asking. I have no idea. He just cries.

When that happens, I console him. I rub his back and fast forward past the offending clip. I’ve learned how to manage it and help him overcome this dark moment. When you have a non-verbal child with autism, sometimes that is all you can do.

This is just one of my son’s behavioral quirks that doesn’t make sense to most people, but it’s one that I’ve learned to work with. It’s part of his personality and I know that even if he had language to explain why it made him sad, he probably doesn’t have a concrete reason for it either. Sometimes things just are what they are.

The iPad that he typically watches those videos on (as opposed to his communication device) is an even bigger mystery to many people in his life. It, along with his Chromebook, creates an issue that I’m still working through it to this day.

Lucas loves his devices. They are his favorite things in the world. He will wake up at four in the morning and ask for them with a banging of his door and a hand motion request. He wants to swipe away all day, every day. It makes him happy. At least, that’s how it appears on the surface.

The common logic is to let him have it in order to make him happy. After all, it keeps him entertained for hours upon hours and can be used as a reward, babysitter, or enticement. The sun rises and sets with these screens and, since he can control them completely by swiping through their apps, they far outweigh the uninteractive television’s place in his heart. 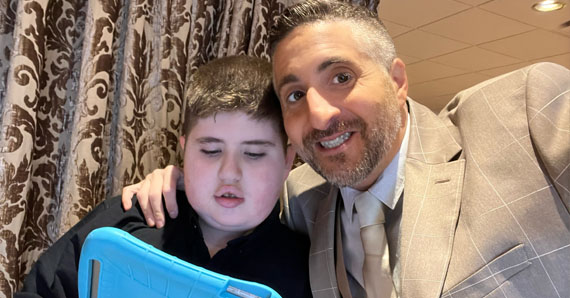 So, we give it to him. We use that device to placate him in times of stress and quiet him in times of commitment. I’ll see him with it at family functions, parties, funerals, and anything else that requires him to behave. I sometimes try to talk others out of letting him have it, but to no avail. The reason why I’m ignored is because, for a while, it works.

A funny thing happens over time. Soon, this device of calm turns into a catalyst of meltdowns. It becomes all he can think about it and all he can focus on. Rather than seeing it as a happy reward, it becomes an addiction. To not let him have it is to invite a barrage of tears, anger, and outbursts. He swings his arms and hits his head. It breaks your heart to see it happen and tests your nerves to deny him his love.

Suddenly, my little guy is no longer truly present for anything. He becomes a different kid. He doesn’t sit nicely at a meal or join in any games with friends. There’s no socializing or moments of Zen. It’s all a furious session of starting and stopping YouTube while his gaze remains a million miles away. People who don’t know him better, and some who probably should know him better, assume he can do nothing else.

This issue springs up every few years. We slowly ween him off non-stop screen time and his attitude returns to even. My smiling little boy is back and everything is right in the world.

Then, someone will forget the journey we took to overcome this obsession and the iPad becomes his go-to again. Before long, he’s back to where he was. We lose him to it and his focus goes from laser to lazy. He doesn’t want anything else and everyone around him is shrugging their shoulders. All we hear about is the things he won’t do and how hard it is to get him to participate. The option that most assume is to give him more iPad time. It’s a vicious cycle that doesn’t end until someone steps in to break it.

The only answer is to ween him off it again. He doesn’t have to stop completely. He just needs to accept moderation. It’s not easy for those tasked with watching him. He gets moody and demands it constantly for about a day. Denying him the screen time can be incredibly hard at first, but it has a definite impact when you do.

It takes a few days to strike that balance again. It’s not easy for him or for those working to help keep him on track, but it’s what needs to be done. It’s like helping someone detox. You wouldn’t just let an addict have a bottle of vodka because they “really want it.” You know it’s not good for them. You know it’s too much. You know they’re a better person when they’re not tied to it, even if it makes them happy in the immediate situation.

That’s my job though. Even when he doesn’t realize it, doing what’s best for my son is what is most important.  His best life isn’t necessarily my most easy life, but I’m not here for easy. I’m here for him. He might not be able to thank me for it one day, but I know that if he could, he would.