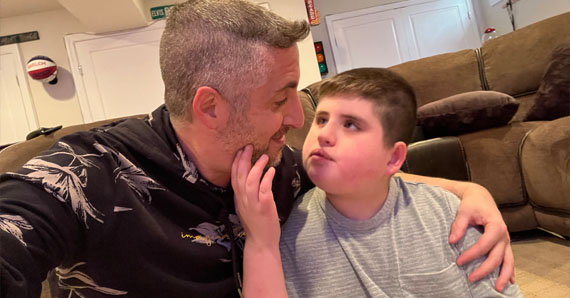 Teaching my son life skills is the most important thing on my agenda. Sure, there are other issues that spring up which require my fatherly attention. Some may even equal that importance now and again. Building an ability to live independently for my non-verbal boy, however, is perpetually the most urgent task..

Lucas’s autism is considered low-functioning in many ways and his condition has been referred to as “chronic”. He will need some sort of assistance for the rest of his life and, as heartbreaking as that may be for someone outside my home to read, it’s become just a regular ol’ part of life around these parts. I am aware of it and I accept it. It feels less dire to me than it would to someone else and, perhaps, than it actually is.

When my son was a toddler, I lived in perpetual fear that he would never do anything on his own or communicate in any way. He was a closed door or an unreachable island, sure to spend the rest of his life being spoon-fed and watched over. Life was going to be hard. That’s what I told myself on a mental loop.

Slowly, however, he started to demonstrate what he could do. When his communication device was introduced, Lucas was quick to share what foods he liked and what shows he enjoyed. I hesitate to describe it with some sort of flowery simile like a caterpillar turning into a butterfly because he was still the same boy I always loved. It was more like a caterpillar turning into a more connected and advanced caterpillar. I was proud of every step he took. I marveled at his cocoon-building skills.

Suddenly, we learned that he could understand colors, use a fork for easily-stabbed food, and even get himself mostly dressed on his own. The surprising moments were so fast and furious that I always had to make a mental note to remember what he didn’t do today, so I would appreciate them when they became commonplace tomorrow.

It would be easy to gloss over his advancements. After all, there are always new things to learn and new milestones still unreached, so today’s achievements can get glossed over. Getting caught up in the bustle of “what’s next” cloud the pride I should give for his newly climbed ladder rungs. The ease in which he can do these life skills now would make it easy to assume that he had no problem grasping them the whole time.

The best way to realize the difficulty that these skills present are to witness his missteps along the way as he learns them. Ironically, his mistakes fill me with the most pride because it proves that he’s really trying to learn as opposed to suddenly deciding to show a hidden talent he had all along.

Watching him bring his dishes to the sink was the first time I noticed this. In his first act of helping, I began having him bring his plate, once his dinner was done, to the sink. With an outstretched hand, I’d make a flapping puppet motion, and say, “Lucas. Bring your dish.”

Almost immediately, he’d oblige. He’d do so by picking up the crumb-covered plate and hanging it, completely vertical like a handbag, by his side. I’d stare in horror as every single morsel of uneaten food tumbled to the ground. He’d wobble over with his adorable smile and place the now completely empty dish in the sink. I’d let out an exhausted, “Great work, buddy.”

Dealing with the crumb issue took time and, if we’re being honest, still does at times. I correct the mannerisms that need correcting while still clapping for his emerging life skills. I know he’ll get it. He just has to trudge through a parade of crumbs on his way to the winner’s circle.

The sink often plays a role in these moments. I know because he recently began taking off his shoes, all by himself, when he comes home. I simply say, “Lucas, take off your shoes.”

Rather than sit down and untie them, he does what I do. Almost as if it’s hard-coded into this DNA, my boy leans against the kitchen island, clutching it with his fingers, and crosses his leg while balancing on the other. With the remaining hand, he reaches down and takes off his raised sneaker.

And promptly puts it in the sink.

I point below as he stares back with confusion. To show him what I mean, I remove his other shoe and place it on the floor in front of him. Then I extend my finger towards it.

Lucas sees me pointing. He hears me talking. He understands “shoe”. What do you think he does next? Yup. Some of you have already figured it out.

He picks the sneaker up from the tile below…and puts it in the sink with the other one.

Good job, buddy. We’ll work on that one.

Again, we’re getting there.

Problems like this aren’t really problems, if I’m being honest. They’re just extra steps that are needed to make his practice into perfect. As his father, I can’t get give up on the big picture because of the slight errors. I just have to help him fix it as we go. If anything, it’s the small mistakes that make me realize how hard he’s genuinely trying.

He’s trying, alright. For that, I couldn’t be prouder. It’s my job to make sure he reaches all his goals, regardless of how long they take to accomplish. No matter how many crumb-filled sneakers end up in my sink, I’ll never forget that I once doubted any of this would be possible at all. Yet, here we are. It makes me proud of him today and excited for what he’ll show the world tomorrow.

ENTERING THE WORLD OF MY CHILD WITH AUTISM