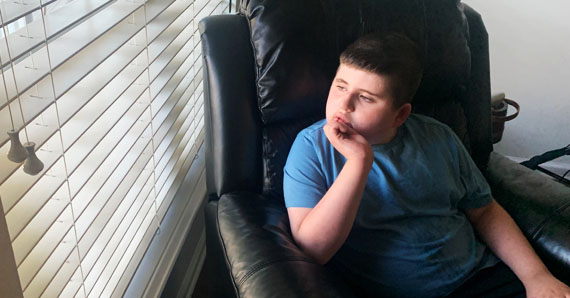 My son has three singing school buses. They all play different childhood songs through their incredibly animated front-facing faces. My son loves them.

I love them too. This isn’t a paid endorsement for Cuddle Barn, but it might as well be. Their buses are great. Once we got the first one, we got the rest. Of all his non-iPad pastimes, pressing the tag to bring his jiving vehicles to life is at the top of the list.

Last week, I could see him getting frustrated while playing the green bus downstairs. It would sing for a moment and then stop. So, reading his annoyed groans, I took the bus and went to get new batteries. This happened just around bedtime.

After putting him to sleep, I returned to the kitchen with a screwdriver, but the screw was stripped. It would be a pain to get into, but I told myself I would in due time. No rush. It was alright. He still had two more.

The next day, while Lucas was at school, I went into this room to find both of his other buses taken out and strewn about with the comforter and bedding he massacres in the night. I picked them up, pressed the tags, and discovered the batteries in both were dead.

My heart sank. My non-verbal guy had slowly watched all these buses stop working. By the time I noticed his ire towards the green one, he had already been pressing tags on his other ones to no avail for who knows how long. He had no way to tell me. So, he didn’t.

Few stories illuminate the struggles my son faces with autism like this one. On one hand, we look at meltdowns, sensory overload, and all-around behavioral issues as the major issue. Yet, imagine watching your toys stop working and not being able to tell anyone about it. To not have the words for your feelings must be incredibly difficult at any age, much less ten yeard old. It’s discoveries like this one that show me how incredible of a kid he really is.

Lucas has a communication device, yes. It’s used, as of now, for requests. He wants pizza. He wants iPad. He wants orange juice. That sort of thing. For conversational things like, “I think the batteries are dead”, he’s still working up the ability to even know that’s a concern.

If anything makes me feel a bit better, it’s that I know my son. This story, while heartbreaking, doesn’t play out as dire as it appears. I’ve watched him react to things that don’t work.

Most likely it began with bus number one slowly fading. When it eventually did, he tossed it aside and grabbed something else – most likely bus number two. The cycle repeated and he moved on each time. The only sad part is that he probably dug the powerless ones out every day to check. It wasn’t traumatic, but it was sad. That, in turn, makes me sad. All I want is for him to be happy.

That familiar voice will sometimes needle me in times like this. It’s the one that says I’m doing it all wrong. Any parent, special needs or otherwise, feels that way sometimes. I try to stay grounded in how I view the situation. Sure, the batteries of his toys were dead. I am fixing them now. I’m doing fine.

As his father, I worry about that though. After all, he might not always have someone there to check on his batteries. That’s the whole problem that many special needs parents face. It’s not doing the things for them that’s the real hard part. It’s the wondering who will do it after you that keeps us up at night.

Although he’s non-verbal, I’m still his dad. So, I have long carried on one-sided fatherly lecture conversations with my captive audience boy. Since he was tiny, I’ve told him about how the squeaky wheel gets the grease. I urge him to let people know what he needs. While I know that many of the words and concepts I spout to his face are beyond his current understanding, I say them more for myself. They’re a reminder of what he needs to learn and what will be important.

Truth be told, I’m learning to bridge some of those gaps. Once, he couldn’t grasp the idea of making the sound on his iPad louder. Volume, while an issue, had never been something he fiddled with or asked to change. I’d have to physically take a muted iPad away from him, just to turn the sound up. As he fought like a tug of war, I’d plead, “I’m helping you. Here. Listen.”

Sound on. IPad to the ear. Big smile.

That’s one concept I thought he’d never pick up, but eventually he has. While he doesn’t bring me the device to correct low volume, he knows what I am saying when I ask him about it. In a sign of my dated age, I’ve made our sign for “louder” a motion of me turning a dial next to my ear. It’s weird, but it works. He gets it now.

The three school buses are singing again and all is the right in our Cuddle Barned world. I now have some breathing room before I have to check on the batteries again. Hopefully, by then, he’ll be able to let me know on his own. If not today, then maybe tomorrow. As long as I’m here, I’ll always check either way.

THE SECRET TO GETTING THEIR HALLOWEEN CANDY