My son will wear anything. Seriously, when it comes to clothes, he’s the most easy-going little guy you’ll ever meet.

I know that some children with autism have sensory issues with clothing, but not Lucas. He rarely has a problem with a fabric and never judges style. The only thing he does that can be seen as a dressing problem is that he likes to chew on his long sleeve t-shirts. You usually find out when you go to hold his hand and you suddenly find your fingers wrapped around a sopping wet cloth flap. Gross.

This laze faire approach to his outfits has given me some great pictures through the years. He’s had Halloween costumes that turned him into Raffi, Maui, and even Elvis (a personal favorite). His lack of speech may have stopped him from debating whether he wanted to wear it, but even if he had words, he probably would not have protested. He just goes with things. Lucas is the coolest.

Having a non-verbal son with autism can sometimes be expensive. There are services, accessories, and items that are vital to his every day. Having kids can cost a pretty penny whether they are on or off the spectrum. You look to cut corners wherever you can. 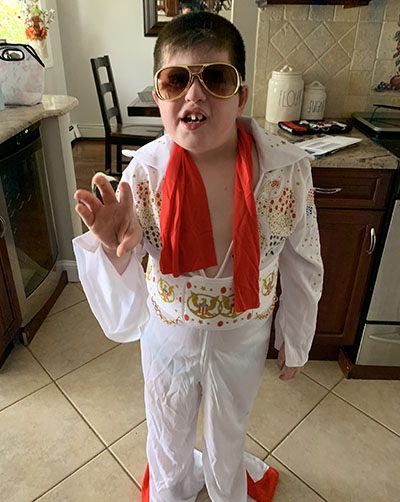 Clothing would be the most cuttable corner.  I can send him to school in pajamas, lederhosen, or a clown costume. None would be a problem. He’d simply zip up his blanketsleeper, do a jig, and adjust his wig. As I mentioned earlier, Lucas is the coolest.

Cheap clothes are easy to come by too. They have them at most stores and, especially for kids, they tend to be abundant. Sweatshirts and matching sweatpants go for next to nothing and would be simple to dress him in every single day. He wouldn’t care.

And that’s the reason I don’t dress him in whatever falls off the truck. I dress my boy like I dress myself. The shirts might not be Gucci and the jeans aren’t 14 karat gold, but they’re not tacky either. They’re regular clothes that I would choose for myself. They’re clothes that I want other people to see me in.

People make determinations about you based on what you wear. For better or worse, that’s the social contract we are all a part of. If I’m going somewhere important, I want to look nice. Clothes make the person. Dress for success.

Not everyone feels that way and that’s cool. People should dress in a way that makes them smile. For Lucas, he has no real preference. Outfits neither make him happy or sad. That’s why it’s up to me to pick out his wardrobe and send him into the world with a shine in his step.

So, I do just that. He has an eclectic closet. Sure, there are some of the bargain bin sweatsuits we all like to slip into on a lazy Sunday. But, there are six more days of the week. On those days, my little guy is as stylish as they come.

He wears Calvin Klein, Nautica, and t-shirts from The Misfits. I spray Axe body spray on him and even slide gel into his hair before slipping his leather Arizona jacket on. Waiting outside the school for his one-on-one aid to come get him turns into a mini-photo shoot.

Kids dress nicely for school. He’s a kid. So that’s what he does. While I make sure that he has mobility and comfortability in his outfits, I also make sure he looks good. I want other people to see him and I want them to remember him. I want him to turn heads for all the right reasons.

Make no mistake, people notice. I realized it a few weeks ago when my daughter made her bat mitzvah. After the ceremony, Lucas and I hopped in the car and drove over to the restaurant for the celebratory brunch. I was wearing a suit but Lucas, I have to say, was the star of the show. With his blue leather jacket, button down shirt, and tie, he was a regular Joe Cool. 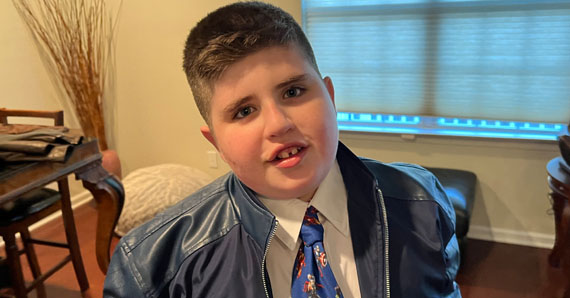 As we got out of the car and started walking to the front of the eatery, a dad with two boys walked past us. He turned and said:

You guys look like you’re on your way to a father-son G.Q. photoshoot.

It was one of the best compliments we could have gotten. I elbowed Lucas and whispered, “See? That guy thought you look nice.”

Some strangers might have the wrong perception of boys like mine. Children with special needs aren’t always covered in glue, paint, or peanut butter. Their clothes aren’t always stained and dirty. Their shoes aren’t always untied. Sure, sometimes these things are true, but they’re true for everyone. My shoes are untied right now.

For many, my non-verbal son might be their first introduction to someone on the autism spectrum. What they see when they see him could affect their assumptions for the rest of their lives. What do I want that them to think?

Damn, that quiet little guy is snazzy as hell.

THE IMPORTANCE OF TEACHING HIM LIFE SKILLS