The most recent time that I felt like that worst parent in the world was just the other week. Olivia, while sitting at the table doing homework, told me that she was having issues with her water bottle while at school. It’s known to be hard to open.

Daddy, I haven’t been able to have any water this whole week.

Why not? Don’t you make that kid open the top for you?

She makes a kid in her class open the top for her. She says it’s his job. I never got the full story, but I have a feeling she’s going to steamroll through life.

No, it’s not that. You haven’t put it in my bag this whole week at all!

At this point it was Wednesday and I realized that it must have slipped my mind. In fact, it slipped all of our minds. Little explosions started going off in my head.

Why didn’t you say anything after Monday? What did the teacher say?  Don’t they still have water fountains?

Sensing vulnerability in me much like the bottle opening kid in the class, she pounced. In her best little kid voice, she started writhing in her chair.

Daddy. I was sooooo thirsty. And all day I had nothing to drink except at lunch. My mouth was sooo dry!

So there you go. Worst parent in the world. You might not think so, but in that moment, I did. Sound ridiculous? Shaking your head and thinking, “That’s stupid.” Well, try this one on for size. I’ll show you stupid.

When Olivia was about three years old, we went to an amusement park that featured pony rides. Once the line shortened up, I brought her over, paid the guy $3, and prepared her for liftoff. Before jumping on the saddle, though, she was already making a sad face.

Hanging just outside the coral door were about four or five dirty little cowboy hats. She reached for one but I told her no and promised that we would buy one at the gift shop on the way out. Still, she was let down and the carny on pony duty even shakily backed me up.

Yeah. Yeah. Those aren’t for this ride. Don’t worry. Maybe you get one on the way out.

They trotted off and I thought nothing of it. At the end of the ride, she was content. She was, after all, three. That’s the prime age for pony rides.

After leaving the park, we were strolling through the gift shop and I couldn’t help but notice there were no cowboy hats like the ones we saw. I was so sure they sold them. After all, there were little cowpokes wandering everywhere. Where did these kids get those hats?

I asked that exact question to my wife. Her answer:

What?! Why didn’t you say anything?

Because I was like 100 feet away. How did I know what you were doing?

She was right but my brain was too wound up to remember. Long story medium, she didn’t get a cowboy hat that day.

But I do. Sometimes it will pop back up into my head and kick me in the side. I think about every aspect of it but it’s all exaggerated for my own personal torment. I picture her reaching for the hat like an Oscar-winning actor grasping for her dangling baby from an open helicopter door. I imagine the pony-man thinking how I was an incredible $2 cheapskate. I think about it all. To this day, I wince when I see the pictures from it.

I guess I should say that it’s silly to beat myself up about these things and how I should cut myself a break. After all, events like these are nothing in the grand scheme of things. In fact, even if there were bigger moments where I messed up, there are still plenty of good ones to make up for them. I should be patting myself on the back instead of kicking myself in the butt. 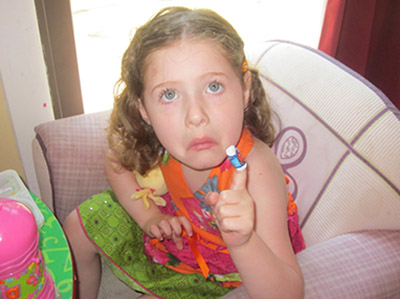 For me, those moments of internal heartache are reminders of how good I strive to be for my children. It’s like setting a bar for yourself that you work to stay above. The falls along the way are what make you human. Thinking about them, analyzing why they happened, and keeping yourself from repeating them are what make you better.

I don’t obsess about these moments either. There’s never been a time when someone asked why I look so sad and I answered, “Nothing. Just thinking about that hat that I didn’t buy Olivia for two dollars in 2011.” That would be kind of weird. That’s not how the memory has affected me.

Today, though, I make sure to check the facts before sweeping through with an arrogantly assumed daddy proclamation. Now if she were to attend an event and ask to get something I didn’t think was on sale, I’d ask the person working there instead of just making up a false reality out of thin air – you know, like I should have done that day with the pony.

Yes, it’s an exaggerated sense of fault in situations like these, but that’s how they become learning experiences. No matter how silly it all sounds, I know one thing for sure. This morning I put my daughter’s water bottle in her bag with about ten ice cubes.

She might grow up to have issues, but empty water bottles aren’t going to be one of them. My nagging brain will make sure of that.