As I’ve gotten older, I’ve become more secure in who I am. I’m aware of my strengths and unfortunately, my weaknesses.  I know my “triggers”, as the kids say, and “touchy subjects”, as the adults say. I can rest comfortably in the knowledge that not everyone I meet will instantly love me, no matter how amazing of a person I am.

It wasn’t always like that, though. When I was younger, the opinions of others meant much more than just words being dumped out of a stranger’s face. They were knives that cut and opinions that scarred. In some cases, they seemed like facts.

The reason why is that I didn’t have that comfortable knowledge about who I was yet. If you tell a 12 year old he’s annoying, that 12 year old thinks, “Wow. Maybe I’m annoying.” They take it as a secret they’ve been let in on, rather than a cruel insult. It becomes a solid piece of information that they carry with them forever and becomes ingrained in who they are. Before long, they start to act out accordingly.

Now, maybe you’re reading this and thinking, “Duh. That’s not me. I was blowing off insults about my looks and personality since I was in preschool.”

Well, if so, you were a stronger kid than me, because I wore that stuff like a leisure suit. My negative labels stuck harder than anything else I heard. The compliments all bounced off within minutes. The harsh “realities” shaped my negative opinion about myself for decades.

As I grew, though, I started to see that not all of those awful statements matched the person I was growing to be. Sometimes others would stake completely baseless claims about me. It went beyond saying I was “annoying” or “stupid”. They were stories that never happened or sins I never committed. I would hear them second, third, and fourth hand. They’d drive me crazy. All I wanted to do is prove them wrong.

For the sake of ridiculous hypothetical example (and not to give word-space to those who don’t deserve it), let’s say someone tells people you eat kitty litter. Imagine that – kitty litter! No one does that and, you know darn well you don’t either. You’re not sure where it came from or why Margot in third period math class is spreading it around. All you know is that you have to stop it.

So you run around telling anyone who will listen that it’s completely untrue. You show them your lunch box and let them inspect your teeth. You cry about unfair it is and how it doesn’t even make sense. Why would you eat kitty litter?! Why would they ever believe such a thing?!

And what do those you’re begging for salvation do in return? They shrug their shoulders and respond, “I don’t want to get in the middle of anything here.” 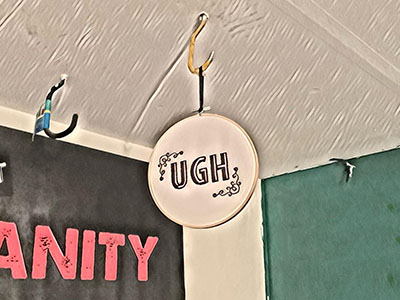 What?! Middle of what?! She’s lying! I’ve never even been to Petco! This isn’t a he said/she said thing. This is a she lied/she lied thing. You want to grab this self-appointed judge’s judge by the collar and scream, “Can’t you just get in the middle so I can have an ounce of peace?! Ahhhh!”

But they don’t. And it eats you up inside, much like you’re sure everyone imagines you devour Fresh Step. You can even swear you can hear faint “meows” in the hallways as you trudge to fourth period.

I used to slam my head into the walls over these moments until I realized something. After plenty of “don’t want to get in the middle” phone calls and “that’s between you two” fade-aways, I learned that it doesn’t matter what is said about me. None of it does.

I know who I am. I know the lies and I know the truth. I also know that no one who truly knows the person I’ve become will ever believe what anyone, no matter how close they once were to me, makes up.

And, if they do believe, then who needs them? Who cares? If someone is so willing to take the insane ramblings of someone else over the strong, proud example I set every day, then I don’t need them in my life.

Why? Because even if I convince them of the truth today, they’ll just believe another lie tomorrow. And all I’ll end up doing is spending the rest of my life chasing them around and trying to salvage my good name. When, in reality, there’s nothing to salvage. My good name is in tact. It always has been. That too is part of what I’ve learned as I’ve gotten older.

I am who I am. I’m not what they say I am. Anything less, can be scooped away. Worrying about it isn’t worth my time. Or yours.