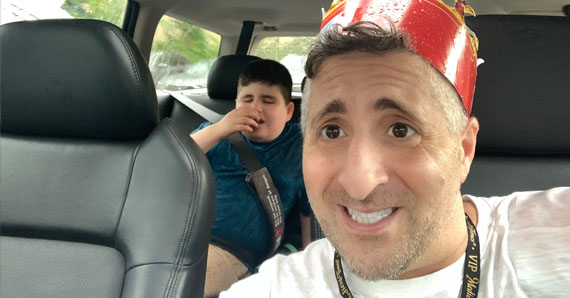 Today’s my birthday. Yeah. Let’s not make a big thing out of it. Birthdays are like bar tabs. The more you have, the less you like to mention them.

In anticipation of the big day, I took the kids to Medieval Times Dinner & Tournament. The long-standing family tradition was typically done at Easter, but after COVID corralled the horses for a year and a half, we jumped at the first chance we got to return. That chance was my July birthday celebration.

It’s been a major yearly event for the three of us. With the great life-change of 2021 starting to settle amongst the dust, it felt good to take a drive out of Long Island and see the world. The three of us packed up the car and sputtered out early on Saturday.

I probably should have known that things were going too good. The GPS was on point and I was saying things like “we’re making good time” and “maybe we’ll have time to walk around.” I was sailing along at breakneck speed and the kids were upbeat and laughing. It was a regular round of Happy, Happy, Joy, Joy up in here.

Then I missed the exit. Which exit? The final exit – the one that was going to take us right to our destination. I had three minutes left on the directions.

The reroute took me miles out of my way to a route that I learned, from a security guard as I pulled up, was closed “due to an event.” By the time I moved the car around, I had driven forty minutes extra and gone through two tolls, totaling $35. When I asked the toll booth woman if she could just take a picture of my license plate and bill me, she said no. The reason: “We don’t do things the same here in Jersey.” Yeah. So I’ve heard.

By the time we made it to the castle, it was pouring. Plus, Lucas was asleep and we had to wake him up.

And right there is where we can separate the special needs parents. Those with children similar to my non-verbal son read that line and chills rush over their bodies. They know what’s next. I might as well stop writing now.

What followed was a nightmare. Full-scale sensory melting down ensued. We walked into the building with him in tears. The knights at the door greeted him and he cried back at them. I held him up like Weekend At Bernies and checked us in amid his shrieks. Eventually we made it to the doorway where we took this picture: 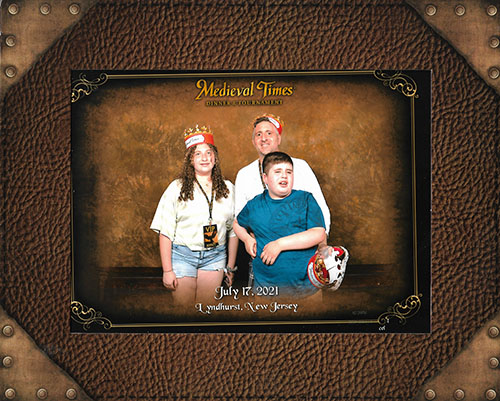 See that? That picture right there that looks like two cosplaying knights kidnapping an oversized boy? I paid $40 extra…per ticket…for that.

As we took our seats, it only got worse. It was obvious almost immediately that he wanted to go back to sleep, but the 1980s movie-theater style seats weren’t conducive for that. He squirmed. He screamed. He hollered. If this was really Medieval Times, the dragon would have been afraid to come near us.

Most of the posts I share are about my son’s upbeat moments, but there are definite flipsides. Lucas is a person and no person is all one thing or another. We can have moments of greatness and times of difficulty. He’s no different. For all his sweet hugs, there are extreme times of sensory overload or total meltdowns. While fewer and farther in between each other, this was one of those extreme times. As his dad, I try to remember that and be there for him. That’s all I can do and, as difficult as it is for me during these instances, I want him to know everything will be OK. Still, it’s like someone else showed up to New Jersey with us. This wasn’t the little man whose presence brightens my day I was used to.

During his bouts of frustration like this, only one things satiates my son. It’s not food, like the tiny chicken carcass I had to tear apart for him with my non-meat eating hands as my bowl of beans and potatoes became cold. It’s not the songs I tried whispering in his ear or the calming shushes that accompanied them. No. In times like these, he likes to bite my fingers. Typo? Oh no-no. I meant to write “my”. He likes to bite the tips of my fingers. He becomes fixated on it.

At best, it’s gross. At worst, it hurts. He struggles to grab my hand and put it against his teeth or smash it into his eyes. If I pull my hand down down in an act of strength, he falls down from his chair and brings his mouth to wherever my hand is. If I don’t allow him to do this, he screams. This went on…for over an hour.

Tell people that and they immediate reply, “Oh. It must be a sensory issue.” Yeah… I know. Identifying why it’s happening doesn’t stop it from happening. It doesn’t make it any less frustrating or infuriating. Calling it a sensory issue doesn’t take the saliva off my knuckles, Karl.

I plastered on a fake smile and hoped that people around us, obscured by bright lights and loud music, didn’t think I was doing weird things to him. The whole scene was out of a dark nightmare. This was a birthday celebration for the record books.

He cried and tried to eat my hand throughout the falconer. He wrestled my fingers to his face during dinner. He shrieked with misery during dessert. Finally, the waiter came over and asked if I wanted coffee. For a second, I was excited as I thought he had said “cocaine.” Nope. Coffee – a thimble full of watery brown liquid.

As I drank it, exhausted from the day that had pummeled me from the moment we entered The Garden State, I felt his hand on my back. I was ready for him to begin another round of battle when suddenly I felt him patting me. I continued to drink as he did, scared to react. Then, he took his hand, placed it under my chin, and turned my face towards his.

We came eye to eye and he gave me a big smile. It was as if he snapped out of a trance. The sun came out, my day was bright, and had an expression that said, “Yo. Look! We’re at Medieval Times.”

I know, little man. I know. Glad you finally showed up.