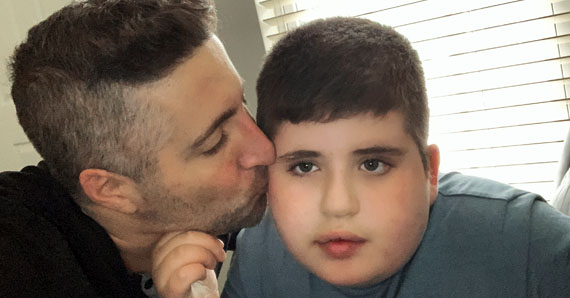 I bought chocolate chip muffins for me and the kids this week. These weren’t the mini-bites Little Debbie versions. These were the overpriced and overflowing supermarket variety that come in the hard plastic case. I thought it would be a nice treat for us all.

On Saturday morning, Lucas was up bright and early. I got him ready for the day and brought him downstairs, where he marched right into the kitchen and double tapped the muffin box on the counter. It was his way of saying, “These will do. Hook me up.”

First, though, I wanted to make sure that was exactly what he wanted and knew his options. I took his favorite breakfast, French Toast Sticks, from the freezer and held them up.

Do you want these instead?

He gave that discerning scholarly expression he’s known for and double tapped the frozen French Toast box. Wanting one more verification, I held up the muffin container next to it and asked him to choose.

Again, he double tapped the French Toast Sticks. We had our verification. I plopped them into the toaster and went upstairs to get the cup he had left in his room.

Now, typically, when someone says that they “ran upstairs for a minute”, it can be a loaded statement. Bathroom breaks, phone calls, computer checks, and all that can extend that minute for many more. In this case, it was not only a minute, but less. I literally walked up the stairs, into his room, picked up a cup, and walked back. It was no time at all. I had French Toast in the toaster and a little guy on the chair in the sitting room. I had stuff to get back to.

As I came back down, I noticed the floor. It looked like stuffing had been strewn all over it, as if a doll had been murdered in the hallway. I turned the corner and there he was. Lucas was frozen in place, hunched over, with muffin overflowing out of his mouth. It was like the scene in Animal House when John Belushi made himself a zit with the mashed potatoes. Yet, this wasn’t a zany comedy. This was my life. And this wasn’t Animal House. Actually, I take that back. Lots of days felt like it was. This was starting out as one of them.

He remained stuck in place, a move that I am convinced makes him think he’s invisible, as my brain adjusted to what I was seeing. The muffins were destroyed, and my floor was a winter wonderland of gluten.

Was I angry? Yes. I gave the ol’ finger wags and “no, no, no”. I raised my voice and showed him the French Toast box he asked for. I pantomimed like Hulk Hogan and made exaggerated movement so he could understand my problems in a non-verbal way. Of course, he cried, which lead to more muffin falling out of his face.

It wasn’t about the muffin. I couldn’t care less about chocolate chip muffins. I can’t remember the last time I bought them and his sister, when she got up and heard about the incident, even said, “Oh. I didn’t want that anyway.” It’s important to know that the muffin had nothing to do with it.

The roller coaster of emotions that moments like this bring is hard to explain to those who never buckled up for this parental ride. When you have a non-verbal boy with autism, it’s not as simple as good, bad, happy, or mad. There’s a lot to process.

I was angry. He had taken what wasn’t his and knew it wasn’t his. He waited until I left the room and grabbed it. While he didn’t have the nefarious nature to hide it, he still froze when he saw me. He knew it was wrong. He did it anyway. Whether it was lack of impulse control or simply, “Screw it, I’m hungry”, I wasn’t happy at all.

I was worried. This has been a problem throughout his life that I have worked tirelessly to deal with. When writing about it, I came across people who insisted that one day he would go to food jail or get beat up for this action. It worries me to send him into a world without the proper self-control in these situations, for fear that he will run into people like that. I can’t be here forever. I know that. It’s terrifying.

I was guilty. Was it my fault? Not just the special needs themselves or the fact that I brought him into this world. But was I wrong for assuming he knew better? Had I placed him in a difficult situation by guessing that he could control himself before leaving the room? Would he ever be able to?

In the end, it all comes from love. It all comes from my feelings for my children and the thought, each day, that I am creating adults for the next generation. Am I teaching him the right things in the right ways? Is he retaining the knowledge that he’s being shown? Am I overthinking his actions when, for children without special needs, naughty behavior is part of the daily routine at times? Am I ruining everything?

If it seems like a lot to ponder, it is. But I have the time to do so as I sweep and vacuum up muffin pieces while he happily shoves French Toast Sticks into his mouth at the table. Truth be told, though, I have more time than just that. I am still thinking about it today. I will be thinking about it tomorrow.

Deep down, I know I am doing things right. But, as the father to a child with perceived disabilities, doing things right might not be enough. There are lessons I can teach him that might take decades for him to understand. There are some he might never comprehend. All he and I can do is try while hoping that tomorrow will be a better breakfast – one muffin at a time.

MY BABY IS ALMOST MY HEIGHT