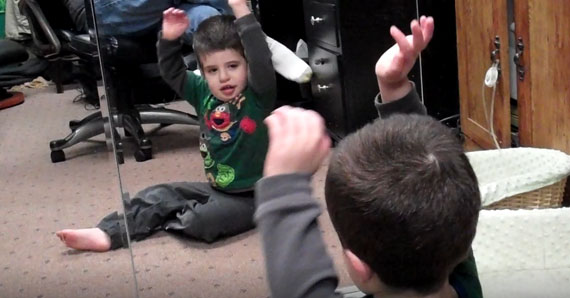 I have tons of photos and footage featuring my children. I fulfill all the dad stereotypes in that respect. The amount of film I shot of them from birth to now became so massive that I used to actually burn DVDs complete with covers and menus to show them off. I displayed them in a bookcase until the digital revolution took over.

It’s rare that I come across a video I haven’t seen in a while, but recently I found some in a folder I had forgotten about. I scrolled through, laughing at how my daughter pronounced words at two years old, and went down memory lane.

After a few from before 2011, I clicked on of my son. We were sitting in my old home office (two houses ago) and he was staring into one of the wall-sized mirrors. Those things were all over that house like a 1970s disco party and he couldn’t get enough. At the time, he must have been just over one years old.

The entire scene was adorable. There he was – Little Lucas at his littlest. He watched himself in awe of the reflection and banged his arm onto the ground with purpose. He stared closely as he clapped his hands together and raised them above his head like he was singing Glory, Glory, Hallelujah. Then, suddenly, he took one hand and glided it through the air like an airplane.

He was discovering what his hands could do and was embarking on a life-long infatuation with reflections. I started smiling the moment the time bar on the screen began moving and I kept going until the end where he and his then-four-year-old sister laughed together on the floor.

Baby videos are a big part of parenting. You can look back as the people you know now were first becoming who they are. You watch their humor, mannerisms, and personalities emerge before your eyes. I saw the Lucas I know and love today coming into his own. I wanted to jump into the monitor and squeeze his little face.

Watching it today “hit different”, as the kids say. I recalled filming it. Days like that one in early 2012 were wrought with anxcious internal monologues, depsite what the my cheerful outword persona on the video might otherwise suggest.

Those were some of the most gut-wrenching times of my life and videos like this one were a big part of it. As he did all the cute things on the video,  you could hear me behind the camera calling his name.

Nope. No looking up.

What are you doing, Lukey? Clapping? Yay! You’re clapping?

Inside my mind at the time, the tone and words were different.

What is he doing?! Clapping. Again? Over and over. Why? Why is he clapping? What is happening? Why won’t he look up? What am I going to do? He almost definitely has autism. No. Don’t say it. He’s just having fun. He doesn’t speak yet. I should be helping him. I should be fixing him. What’s he going to become?

That’s the truth. Times like these brought me little joy back then because they were indicative of a future I couldn’t imagine and a special needs concern that was only just starting to be spoken out loud. My son was growing up before my eyes,  but I had no clue what he was growing up to be. I loved him with all my heart and that’s why these lovable moments made me a bit nauseous.

So why do I, today, watch that same video and smile? How do I witness the same actions on display, yet they evoke happiness instead of nausea? What has changed?

I know who he’s grown into, that’s what.

Don’t get me wrong. He’s ten. There’s a lot more growing to do, but he’s here and he’s who he is. Those personality quirks from his toddler years have evolved with him. Watching him do those things no longer make me question what it will look like when a ten year old does them for one simple reason.

Because he’s a ten year old, he does them, and he’s awesome.

It’s all fear of the unknown. That’s all it has ever been. Sometimes it still is. Just like I sat there ten years ago, watched a baby wave into the mirror, and worried for the future, I sometimes think the same when projecting him into adulthood. What will it look like when a 30 year old is doing the same things he’s doing now? What will the world offer him? What will he offer the world? What will happen?

Is it worrisome? Sure, but not as much as it once was. Why? Because I’ve already lived through the passage of time once. I made it from age one to ten and the result, unimaginable at the time, wasn’t as dire as I feared. In fact, it’s not dire at all.

So if ten isn’t dire, 30 won’t be either. It will be hard at times, like any parenting is, but it will be manageable. We will face every challenge together and continue to crush it. He’ll be the best he can be and we will be happy. I know that in my heart.

The best news of all is that I won’t have to back and watch videos from today in 20 years to tell myself that. I can watch it right now, before my eyes, and applaud the wonderful person my son is in real time.

WHEREVER MY CHILD WITH AUTISM ENDS UP, IT’S NOT A FAILURE