I had never considered myself to be a patient person. I was the guy who would tap his foot in frustration while waiting on line or constantly ask, “Where the heck is this waiter?” If anything took more than a few minutes, I could feel my frustration building to a fever pitch.

But then came the heart surgery. A quintuple bypass will do wonders for your peaceful disposition. I had to force myself to take a psychological time-out. I’m calmer and more measured today than I ever was before. Sure, I still have my moments here and there, but things are different than they were for me way back when.

Truth be told, though, my journey away from perpetual annoyance started a few years before that. It had to. I had kids. 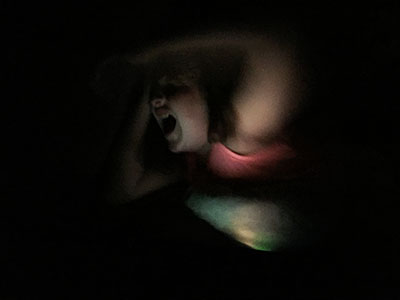 You have to tolerate a lot of insanity with an even temper after life hands you children. I mean, you don’t technically have to. You can run through the house screaming and slamming your head into cabinets when things go wrong. All that would leave you with is a kid that still needs you to get them a drink and a sore head. Ice your noggin and go make some lemonade.

Five minutes later, I’ll head up to check and faintly hear some Youtube Roblox streamer screaming about his latest build through the door. I will call to her in the most authoritative voice I can muster.

Hey! I thought I told you no phone?

Since the door is closed, she doesn’t lie to my face in this instance. She lies to my door.

How?! We had this conversation five minutes ago.

So, the phone gets taken away for a while or she goes to bed earlier with an angry look on her face. Whatever it is, I find something to make my point. The bottom line is that she just remembers to not do it again. She may sulk or refuse to say goodnight, but she gets it. She made a mistake. I’ve corrected her and we all move on. No yelling. No screaming. No Internet videos of me shooting her phone with a rifle. Cool calm zen Daddy.

Then my son came along and introduced a whole new layer of difficulty to this tranquil poppa approach that had been working so well.

My seven year old, Lucas, is non-verbal and has Autism. His attempts to get around rules are on a completely new level. His repeated actions, if done by his sister, would be clear declarations of Daddy War. There are some days when I am in awe of his nerve.

Telling him not to do something and having him do it anyway isn’t always the result of a communication misunderstanding. Sometimes it is pure impulse control. If Lucas wants something, he goes and gets it. You can stop him, correct him, or punish him. It doesn’t matter. If he wants it, he’ll return the minute you take a breath and try again. Nothing stops him. If he was using this technique to climb the corporate ladder, he’d be applauded for this type of go-get-em attitude. Instead he’s using it to steal muffins from the cabinet.

His favorite conquest? IPads when he shouldn’t be on iPads. They are easily his favorite creation. If Lucas’s life was portrayed as a video game, it would be him running through a house of obstacles and collecting little iPads for points. He will find them, grab them, and immediately begin swiping away. Sometimes, I will catch him sneaking over to one when he should be in bed. So I come by and take his hand.

He lets out his tiny whine and drags his feet, but eventually gives in and allows me to lead him back to his room. I watch as he marches in, climbs onto the bed, and covers himself up again with one last angry groan.

Within literal seconds of turning my back to his doorway, I feel the vibrations of tiny feet hitting the wood floors and furiously trotting back to the kitchen where the electronics are charging. I will come dashing in from behind only to find him standing at the counter, an iPad in his hand and his body frozen in time. Upon seeing me, he usually raises one arm over his face, which I’ve learned is his attempt at hiding.

As a parent, your instinct is to freak out. It seems to go against every single natural response a dad should have. He is willfully disobeying and not even doing it well. It’s like he doesn’t care that I am mere feet away or that his screen time would only last seconds. He just has to do it. He can’t stop himself. I’m his dad and, after all these years, I’ve come to understand and accept that. He’s not being bad. He’s just being him. But, oh man, you really have to remind yourself of that in the moment.

All of that might be true, but still, he can’t just be rewarded with his iPad at four in the morning. After all, if he learns that he gets what he wants by persisting in the face of “no”, we’re all in big trouble. It would be the easiest thing in the world to say, “Here’s your freakin’ iPad. Sit in your room watching until the sun comes up.” It would also shape his approach to the world in a way that would make him less than the adult I want him to become.

That’s when the real patience comes in. It’s absorbing all of this seemingly blatant disrespect and knowing that it isn’t being done to be blatantly disrespectful. It’s about keeping your cool and trying to correct his behavior in the way that’s appropriate for the situation and for him.

These moments of patience stretch beyond iPad runs. He might come over and take my hand off the computer keyboard as I’m typing because he’s suddenly hankerin’ for a bag of Pirate Booty. Sometimes, he’ll steal half a sandwich off my plate and stuff it in his mouth so tightly that you’d think he was doing some sort of Food Challenge. We’ve had moments where I’ve stared at him in shock. There’s no one like him in the world and he truly amazes me in so many senses of the word.

The goal is to get him to act better and losing my cool won’t accomplish that. Getting angry does nothing but make me feel worse in the moment and perpetuate the behavior anyway. He doesn’t react to it and, if it doesn’t solve the issue, then it will just make me angrier and continue the cycle. It’s that ability to slow down, take a real look at what you’re doing, and proceeding accordingly that fixes small problems before they become bigger issues. I love him and that’s my main job. I’m here to correct his behavior, not to scream and yell until I feel better.

I always wanted to be more patient. Today I feel like I am. I’m just glad I’m not yelling in a house full of broken cabinets. Luckily for my kids, this is who I am now. And luckily for me, they’re the ones who made me this way.