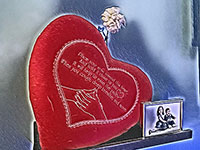 I don’t know when it happened. At some point, I didn’t have to tell Olivia how to do basic human interactions anymore. I could just sit there, as a person, and let my daughter be a person too.

When it came time to order her meal at TGIFridays or whatever chain restaurant she dragged us to, I no longer had to order her food. When it came, there was no need to remind her in a quiet whisper to “Say thank you.” I didn’t even have to cut it up on her plate so she wouldn’t choke.

I mean, I could if I wanted to. Any parent can continue to do those things for as long as they want to. It can make for an awkward Parents-Weekends at college, but it can still be done. I’m saying I didn’t have to, not that I didn’t want to. I recognized that she was growing up, gaining the knowledge to know what’s appropriate, and becoming her own person. It feels like I should be sad about this, but I’m not. It doesn’t mean I’m not important. It means that I have solidified my importance in her life. After all, I’m the one who trained her for these moments.

Let’s not kid ourselves. It still makes me nostalgic for when she was my “Little Face” with her, well, little face. Olivia was my first child and, before her, I didn’t realize you could have such strong feelings of love and protection for another person.

Don’t get me wrong. I had my wife, but she’s a full-grown human being. I’ve listened to her lay into Safe-T-Swim employees over class registrations they misplaced enough to know that she can handle her own. Olivia was the first person who genuinely relied on me to protect her from the world. She’s the first person who I knew I’d have to throw myself into a volcano to save, if the scenario called for it. Luckily, we don’t live near volcanoes.

We spent a lot of time together in her infancy and toddling years. I remember full days of watching TV and making faces at her while she giggled and fell asleep in her bouncy chair. We spent so much time at the library that, on the rare occasion that I wasn’t with her, the librarian would look up and ask, “Uh, forget something?”

Last week, this tiny little baby girl came up to me right as she got home from school. She pulled me into my office to deliver some spy-like instructions.

Daddy. Next week at graduation, when they ask for a member of the family to stand up, you stand up. OK?

I agreed but, as she was walking away, I took a moment to do a Dad thing.

It’s a good thing, right? You guys aren’t all going to take out bats and jump me?

She laughed, which had more to do with her coy secretive mood than my lame attempt at edgy humor. Either way, one thing was clear. This baby has become eleven and as of this month, she will no longer be an elementary school student. She is graduating and heading to middle school.

I have a confession to make. Despite my clueless dad façade, I knew why she was asking. I knew that me standing at graduation would be some sort of recognition. I figured the principal, with his impeccably groomed beard, would ask everyone to applaud the standing parents. Maybe they’d refer to us as the unspoken graduates or another equally nice sentiment. I was ready to stand, do the courtesy “m’lady” head wave, and sit back down into my seat.

I spent a lot of the ceremony putting names to faces from stories Olivia told me. I saw the boy who tried to punch the girl in her group, the kid who cried when they asked him to do classwork, and the twins who fall asleep at lunch. I saw them all. They all looked like eleven-year olds. Surrounded by them all, Olivia did too.

The whole thing had almost ended and still, I was in my chair. I had all but given up hope until the principal called one member of each family to stand. I, along with a hundred other people, followed our order.

He started doing a speech about how important we all were and how this was a tradition in the school. I wasn’t really following his words because, as he began to talk, all the tiny graduates had stood up from their spots on stage and began to file down the stairs. As they did, a teacher handed them one flower each. I saw the first ones in line delivering them to their family members through tearful hugs. 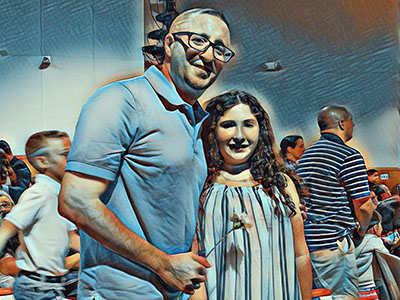 I looked around at this outpouring of emotion and remained standing as my kid, stationed in the middle of this conga line of children, waited her turn. The principal was still talking, but it was hard to hear over the song that was playing.

I looked up at the screen and, as the lyrics said something about “growing up” and “always my baby”, the video playing was one with parents walking their kindergarteners to school and teaching them to ride bikes. I hadn’t expected that. My throat felt weird and my eyes started blinking. Then I realized it.

These people are trying to make me cry.

That’s the goal here. They stand me up, play this music, show this video, and have my kid give me a flower. Then I break down in hysterics. Nice try. This ain’t the Hallmark Channel.

And yet, I almost cried. Which, if you know me, is a big deal. I don’t cry much, especially in front of my children, so I didn’t. I have to be honest, though. On the inside, I was bawling like a kid in a Peanuts comic. It was one of the most heart-wrenching-in-a-good-way moments I have ever had in my life.

When she came by and handed me the flower, I didn’t know what to say. I told her I loved her and posed for a picture. A voice in my head kept repeating, “You did it. You did right. This moment, right now, is all you ever wanted.”

That’s the truth. It is all I ever wanted. I might not write about Olivia as much as I write about my son, but she’s getting older. She requires a different level of privacy and many of our conversations are between us. I don’t want to betray her trust or embarrass her for the world to read. To this day, I run all of my Olivia blog mentions by her first. I owe her that.

Make no mistake, I could write about my daughter until my hands fall off. We have so many unforgettable tales and irreplaceable memories together that I could fill pages upon pages with. She was my first baby. She showed me I was capable of a love I never imagined possible and taught me to be the father I needed to be for when her brother came along.

I am lucky to have her in my life and I have always been aware of that. I’ve known her since she was a seedling and it’s been my honor to take part in helping her grow. She is the most beautiful flower I have ever seen.