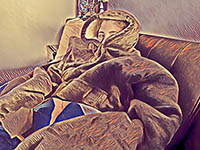 Kids are resilient. That’s pretty much their motto. If kids had a slogan, t-shirt, and sales pitch, that would be at the top of the short list. In many cases, it’s usually true.

So, when Covid-mania swept the world, everyone seemed to focus on that. Sure, we acknowledged that this global pandemic was historic. We told our sons and daughters that one day, this will be a story they tell their grandkids. Being locked in the house with everything short of pharmacies and supermarkets closed indefinitely would be unlike anything else in their lifetimes. It’s kind of a big deal.

But they’re resilient, right? We told ourselves that. In fact, we even figured they would love it. After all, schools are closed. What kid doesn’t like a shuttered schoolhouse? That’s like hitting the youth lottery. In Cloudy With a Chance of Meatballs, they cheered when a giant pancake fell on it. A day without class is equal to a trip to Disney World which, considering that Mickey Mouse is closed down too, makes it even better than a trip to Disney World in its current form.

Then, slowly, one day without school turned into two and then three and then fifteen. Soon, no one knew what day it was, when things were going back to normal, and what exactly was happening.

We, the grownups, focused on the grownups stresses. We banged our heads against the wall with frustration for broken routines, cancelled plans, and interrupted patterns. All we want are answers that, to be frank, no one knows. All we can do is wait.

The same can be said for our children and, before long, we started to notice that they were dealing with their own struggles. 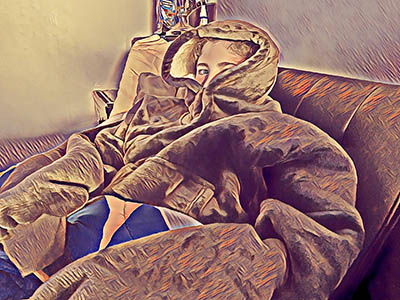 With the days and nights melting into each other, my daughter had taken to spending a good amount of time in her bed smothered in her wearable blanket. Doing what’s right, we kept both kids inside the house as much as possible. There are germs out there. So, I have to keep my kids away from out there. That’s how it works.

It was working, but we hadn’t noticed that my daughter hadn’t been calling her friends or trying to retain her own sense of normalcy the same way we were. We may have realized reality, but she, at 11, still hadn’t. She was just biding her time for the adults to tell her that things were ready to go back to the way they were. The maybe-dates that she heard from school bulletins were taken as gospel. We knew they were rough estimates, but she didn’t. The closures stretched on and soon, she was sluggish and surly. The general sense of malaise covered us all.

So, I told her to put on some outside pants and get in the car. We were taking a drive. She wasn’t happy about it, but I’m the dad and Daddy knows best, right? I hoped so.

We started the trek around Long Island, stopping at her friend’s house to have a conversation out the window from ten feet away. At first, it was a bit awkward, almost as if they had forgotten how to converse. But, within minutes, Olivia was the Olivia I remembered. She was smiling, laughing, and asking if we could drive through Starbucks, one of the only things left to do around here from the comfort of the car.

I took the risk and did just that. An arm’s length from the drive through window, I put on my leather Dexter gloves and ordered her some pink drink that looked like a melted unicorn. I had a chai latte with almond milk and, if I’m being honest, it was best thing I’ve ever had from anywhere. It tasted like regular life – a regular life I forgot I missed – only sweeter.

From that day on, she’s been great. My son is a similar case. Although non-verbal with autism, he still shows signs of boredom. This extended break from the everyday has left him with nonstop TV and iPad time. It’s like a dream come true. But, to paraphrase Willie Wonka, do you know the story of the boy who got everything he wanted?

He got super bored and openly miserable.

Lucas had some mandatory outside time too. He and I took a drive, with no stops from one end of the county to the other. The fresh air did him good and he, like the sister that he seems to emulate in his own silent way a little more each day, was back to his old self. 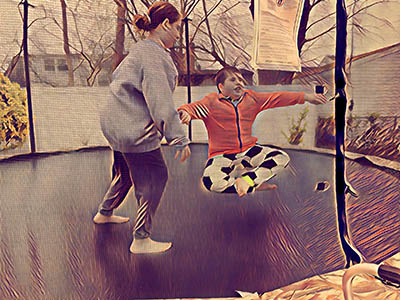 Right around then, the trampoline we ordered for his birthday finally arrived and all bets were off. Now, both kids are bouncing around like jumping beans and life has taken a turn from the mundane to the insane – the happily insane. Things are good.

Yeah. Kids are resilient, but sometimes they need us to remind them of that. Life is hard right now for all of us. Our children are part of that group. They may be stuffing their faces with cheeseballs and wearing the same pajama pants for days on end, but that’s not as fun as it seems after countless days of nothing more. Give them some air. Give them some fun. I did and it did wonders for them.