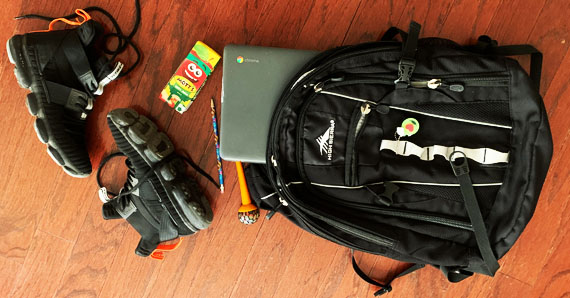 I always wanted the Transformers Trapper Keeper when I was a kid. The robotic glare of Optimus Prime from atop the inclined holder of loose-leaf told the world that the contents contained within were not to be trifled with.

Robots in disguise were just the start of my supplies. We had to get number two pencils and a tiny plastic sharpener that came complete with an exposed razor blade. There was a pencil case to hold said pencils, a ruler, colored dividers, scissors, Elmer’s glue, and a compass that could poke an eye out. It was a bunch of school stuff with two deadly weapons mixed in.

Here’s the thing, though. No matter how shiny or new these items were in September, they were pieces of garbage by March. As the school year entered its final months, everything I brought back and forth in my damp, garbage-filled knapsack was dying with it.

The three pencils that remained from the original one hundred were all cracked in half and full of tooth marks. The zipper on the pencil case had long since been destroyed, as was the sharpener which had stopped working when I put either a crayon or stick in it, depending on the year. The scissors no longer closed because of all the dried glue that was stuck to the blade and the remaining glue wouldn’t squeeze out because of, well, all the dried glue that was stuck to the top. I’m assuming the compass still worked because we never used it. In fact, I don’t remember ever using that thing to make a circle before high school, yet they made us bring it every day starting in second grade. It seemed like part of a grand plan to make little kids stab themselves.

While all the lesser supplies had been falling off, it was the main item on the list that suffered the most. The Trapper Keeper’s name had become ironic at this point. It trapped nothing and kept even less. The rings wouldn’t close right and holes in the divider sections had become so torn that all the papers dangled out. You couldn’t even close the thing because its Velcro no longer clasped. Instead, you had to hold it tightly under your arm, hoping that the pressure would outperform the gravity. Everything was falling apart. It was hell.

Why am I telling you this? Because the school gave my kids freakin’ Chromebooks.

Go on. Take a minute to soak that up and read it out loud. Chromebooks – pieces of technology that cost more than ten Trapper Keepers and are far more precarious than Optimus Prime ever could have been; they gave them to my kids – both of them.

They not only gave my little Tasmanian Devils these delicate pieces of equipment, but they want them to bring them back and forth to school every day. I often wonder if whoever came up with this plan ever imagined the horror show that is my daughter’s lunch box after she gets home. It’s filled with wrappers and half-eaten food that I don’t even remember giving her. It’s as if she collects extra garbage to bring back home throughout the day. They expect the delicate Chromebook sent back in that same Pandora’s Box of a bookbag every morning.

My son has a Chromebook too. On the off-chance that he goes remote, the device comes in handy for lessons. I get it. As a student who is non-verbal with autism, it’s become an item that we do use on a regular basis to keep him learning. He too is expected to bring it into school with him.

Keep in mind, this is the same kid who has attempted to pick up his television and throw it into the hallway in order to get my attention to bring him a cup of water at 3AM. He’s far bigger than he realizes and, even in his sweetest moments, he can get pretty brutal. His hugs can be overwhelming, and I’ve watched him sit on many items he shouldn’t have.

Do you know how he sits down on a chair? He literally throws his entire body into it with all the force of Randy “Macho Man” Savage dropping the big elbow. It’s like he learned how to sit down from Sumo Wrestlers on TV. Every time he slam-dances down, it sends the recliners back a full foot. By the time he’s done watching TV in the sitting room, every chair is flush against the wall. You’d think we had a Poltergeist. 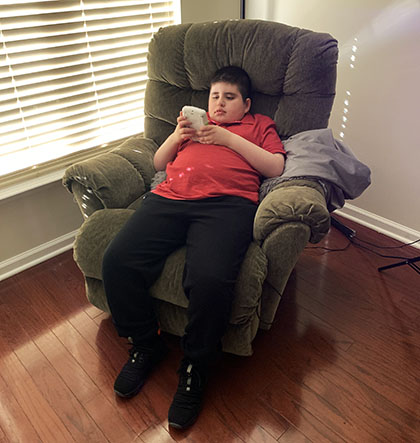 They want the Chromebook to be sent in each day…in a bag that he wears on his back.

Of course, no Chromebook is complete without the charger. You can’t have a Chromebook without a charger, Grandpa. Come on. You know how these things work. You need to send those in too. Every day.

There’s just one question I ask every morning. Where the hell did we put the charger? Many days, my brain begins to piece together my previous 24 hours like a buddy comedy where I wake up in Vegas.

By the end, the charger is found plugged into some random outlet in the house and I breathe a sigh of relief and send it in….only to later find out that it was my daughter’s Chromebook charger. There’s still one in the house. Then the whole process starts over again.

This is the part where I am supposed to sip my Sanka and go on some old man rant about how “back in our day”, things were better and the milk man rang twice or whatnot. Truth is, though, I won’t. It’s the exact same thing today as it was back then, only the stuff is more expensive and more is expected from the parents. So, we push on and do what we’re told.

The best we can do is hope that one day, when our kids are grown, the schools will give their kids giant boulders to bring back and forth as revenge. In the meantime, I’ll keep sending that thing in to school in one piece, safe from squashing, and with the charger it came with. That’s called being responsible. I learned it from Optimus Prime.

PRANK PHONE CALLS WITH MY DAUGHTER

Get Your Copy of James Guttman’s Latest Book – The Expectant Father’s Activity Book!