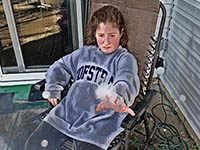 When my daughter was still in second grade, I remember a particularly difficult walk home from school. She was grumpy from the moment she came out of those swinging doors and her mood never seemed to lift.

Is anything bothering you?

She shook her head no, but there was a real look of irritation on her face. She glared at the ground as if it owed her money, and each step was a like debt collector’s kick. I tried making conversation.

Maybe we can watch a show together when you get home.

Still angry. Still stomping. I tried a few more olive branches before I finally asked the question on everyone’s mind.

Olivia, what is wrong with you? Why are you so mad?

To this, my little angel stopped short in her tracks. She stood up straight, despite the hunchback-inducing backpack dragging her down. Then with both fists clenched, her face turned red, she stared a hole into me, and shouted.

I fell to the ground laughing. Believe it or not, she did too. This act of after-school insanity was hilarious and, as I’ve learned in the four years since, an act of foreshadowing.

My baby girl is rapidly shedding her baby clothes as she sprints towards the dreaded teenage years. As Steven Seagal so eloquently put it in Out For Justice, maybe it’s mood swings, maybe it’s hormones, maybe it’s the need to impose her will. Whatever it is, this little princess is turning three shades of rabid.

This timing of this lockdown couldn’t have come at a worse point in her maturation because I feel like these are the days we were warned about. Suddenly, this smiling little angel can go to hell quicker than a quarantined cough. I will walk into her room and be greeted by…

Just telling you that dinner is ready.

Good! Get out of my room!

Yeah, not cool. I know there are people reading this right now and thinking, “You let your daughter talk to you like that?” No. No, I don’t.

I turn to walk around and that’s when the Shining kicks in, or whatever is brewing in her curly-haired noggin.

You’re not? You don’t know what mean is then.

But I’m not being mean.

That’s not how mean works. You don’t tell people you’re not being mean to them. They tell you. And I’m just telling you that dinner is ready.

Are you kidding me right now?

It’s insane. This has been a running theme in the house. My daughter will change her mood multiple times during a multi-syllable word. She will begin a sentence smiling and end with the wrath of Zuul behind her. I can’t get out of that fairy-lit room fast enough and often that’s just how she wants it.

Make no mistake, this isn’t the only way I tried dealing with her newfound aggression. I have had plenty of moments where I threatened to withhold iPads and TV time. I have argued and fought. I have begged and pleaded. I have done it all. None of it worked.

The only thing I did start to notice was that my reaction played into hers. If I got angry, she got angrier. If I was hurt, she was devastated. It was like being tormented by a little mirror. Nothing I could do would cause the outcome I wanted until…

I walked into her room the other night to offer her a piece of candy. I found her with her face buried in a game of Animal Crossing. Before I even opened my mouth, she shouted, “Get out!”

I froze in position. I didn’t turn. I didn’t leave. I didn’t do anything. She looked up and we locked eyes. That’s when I slowly started to crack a smile and began laughing. It wasn’t even a parenting technique. It was a natural reaction to the ridiculous nature of this whole back and forth. Do you know what she did?

She started laughing too. We both were in hysterics as I pivoted and walked out of the room. She followed and we ate Sour Patch Kids.

Look, I remember what it was like to be eleven. Actually, I take that back. I barely remember what it was like to be eleven. I do, however, remember feeling confused and moody. Hell, I still feel that way a lot. I felt that way this morning. I know my daughter is growing, changing, and entering the turbulent adult years. To expect her not to go through mood swings would be unfair. To freak out over all of them, when I recognize the ones that are beyond her control, would be even worse.

One day, we’ll both be older and look back on this time with laughter. I look forward to those days…if I can survive until then.