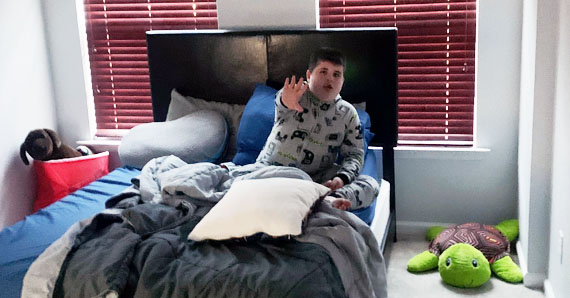 My son gets more of a workout when he’s asleep than most adults do when they are awake. I don’t know whether it’s his dreams, restlessness, or the need to impose his will, but that bed doesn’t stand a chance.

Currently, the mattress is diagonal and unsteady on the baseboard. I slide it back and almost immediately, it’s off-center again. Screws and bolts appear under his bed frame like the Screw Bolt Fairy came to visit. When I move it out of the way to clean underneath, I feel like it’s going to crumble in my hands. I bought this bed in freakin’ January.

I also buy him pillows. Why? I don’t know. You tell me. They’re pointless since he yanks them from their cases and throws them to the floor like hot garbage. I find the remnants of his discarded head cushions around the perimeter of the room like the battered bodies of conquered victims. Lucas – 1. Pillow People – 0.

“What are you doing, buddy? You need these pillows,” I’ll tell him as I collect them from the floor. From there, I wedge them behind his head and attempt to tuck him in.

I say “attempt” because he’s usually planted firmly on top of the comforter with no sign of movement. His body, growing each day like a wrestler who just got called up for TV, makes moving him impossible. I ask him to shift, but he doesn’t. So I try to pull on it, but he just slides along the mattress like it’s a ride. While I’m sure many will assume he doesn’t understand because he’s non-verbal with autism – don’t. He knows. I can tell from his face. He’s a little bugger. He likes the comforter ride.

Eventually, he relents and scurries under. I give a goodnight and leave the room. Within a minute, everything I’ve done has been erased. He’s out, the pillows are conquered, and the overhead light is back on. Lucas – 2. Pillow People & Daddy – 0.

If we’re being honest, though, this is ten times better than the olden days. It’s hard to really explain unless you’ve witnessed it, but my son’s sleep position was the most bizarre thing I have ever seen. He used to sleep in a sitting position with his head in his own lap. I kid you not. It was like watching a Yoga Guru lead his people. The black and white image on his baby monitor used to freak everyone out. Look: 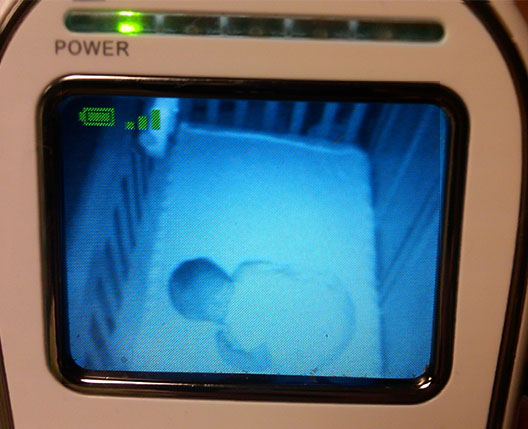 This wasn’t an occasional thing. This was a nightly thing. I remember marveling at the flexibility it must have taken. I never knew how he did it.

I found out, though, a year or two later while on vacation. Lucky me. With only two beds to a room and no one else able to brave the great unknown, Daddy was on Lucas duty. It was then that I learned the painful secret of his bent sleep.

The revelation didn’t happen immediately. There were other issues at hand first. Since he had become used to sleeping with a wall on one side and a barrier on the other, I had to first stop him from tumbling to the floor constantly. I remember the first time a thud woke me up. I found him on the carpet with a bewildered expression. I placed him back up and closed my eyes. Thud. It was a nightmare.

Then, after a number of fallen-retrievals, it happened. The bed shook while I was just about to drift off. I opened my eyes and looked up to see my son sitting straight up about a foot away. He was half-asleep and just sort of looking around the room. I remember examining him, as I often did and still do, to understand what he was thinking. I figured he was taking in the room and remembering that he was in a hotel, rather than his own home. There were lots of things to ponder.

I was deep in that thought when he suddenly jerked his head backwards about half an inch and came slamming down forward into my own head. I can still hear the crack of the craniums. It was the most shocking, unexpected, and confusing pain I ever had. I imagined having to explain to people that my sleeping son had blackened my eye in Disney World and endure the barrage of questions that would surely follow. Thankfully that didn’t happen. Needless to say, I propped pillows around my head for the rest of that vacation.

In the end, this isn’t really so much about autism. It’s about kids. Most kids just sleep like little animals. That’s why we put them in barred-up cages until they’re two. The best you can do is give them their own place to sleep, plenty of room, and a teddy bear who can take a beating and keep on sleeping. Get a good one. That teddy is going to have some war stories.

SLEEPLESS ON THE SPECTRUM