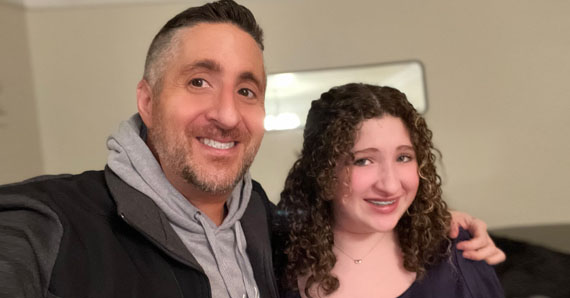 There’s no application to be a parent. I mention that whenever I talk about having a special needs child. People assume that since my non-verbal son requires individualized care, I must be some sort of autism expert.

I’m not. I’m just a dude who had a kid. The kid that came out was mine. That’s how it works.

I may have learned a lot through the years, but I had no advanced knowledge initially. I was a fish out of water, holding a human baby in my fins, and wondering what I would do to mess it all up out here on land. Being a dad can be rough. It’s on-the-job learning and drowning is a definite option.

Fortunately, I had already dealt with this issue a few years prior to Lucas’s birth. Long before I had to decipher language without words and unspecified timelines, I had to wrap my head around another issue. It was something a doctor told me when my daughter was two seconds old.

That she was. Right there. A baby girl was in my arms, in my heart, and in my house. I hadn’t fully prepared for this, but there she was. Sugar and spice and everything mine. I had a little girl.

I didn’t understand girls when I was a kid.  I understand even less as an adult. The one thing I have discovered as I’ve gotten older is that the more I think I understand women, the more I get knocked for a loop when the time comes. It’s a case of Men are From Mars and Women are from…What? Why are you mad? What did I do?

As a divorced dad with joint custody, the half-week my daughter is here brings a number of girl-centric topics that I need to be on the ball about. There are questions I’m asked and insight I have to offer that, a short while ago, would have left me befuddled. Through the magic of Google, helpful people, and on-the-spot thinking, I’ve made it all work.

I remember the first time I realized that I was truly a “girl dad”, as the memes call us. Olivia was about four and she was talking about what she might want to be when she grew up.

I can’t be an Astronaut. That’s more of a boy job.

Yeah. That’s all it took. What followed was one of those fatherhood moments where the words coming out of my mouth were just as new to me as they were to anyone listening.

Say it. Say you can do anything.

I can do anything.

Keep in mind, “girl power” and female empowerment weren’t things I had ever really offered an opinion on. I grew up around zero girls my age. No sisters. No neighbors. Nada. The closest I came was going to a friend’s house and making his sisters’ Barbie dolls do weird things with the WWF LJN Figures. We were demented little kids. The Junkyard Dog was a very popular guy in the Barbie Dream House.

Yet here I was, decades later, leading the charge for women’s rights. While that outburst may have been my first female fatherhood declaration of strength, it wasn’t the first act that made me truly feel like a “girl dad”. That occurred a year or so later.

Up until kindergarten, my daughter had been big on wearing giant headbands. They were these enormous crescent moon attachments that would grip her head and block the hair from her face. The best part about them?  You didn’t have to do her hair. So, for years, her hair just sort of sat on her head.

It was a shame, though, because Olivia had (and still has) an amazing head of curly hair that’s reminiscent of my own baby pictures. She has curls and volume and tons of things that they talk about in L’Oréal commercials. You know what they say. Maybe she’s born with it. Maybe it’s Maybelline. Actually, I’m not sure if that’s makeup or hair. Forget I said that.

One day, without a headband to grab before school, I stood her in front of the bathroom mirror and began to douse her head in Frizz Ease. I didn’t know what it was or why my now-ex-wife had bought this little purple spray bottle. Either way, it was in the vanity and I knew what the words Frizz and Ease meant. So, I set out to ease the frizz.

And ease it, I did. I sprayed it all over and then worked out the tangles with a brush. She complained a bit, but it wasn’t too excruciating. Then, in a final move of my stylistic improvisation, I squeezed two dollops of mousse into my hand, rubbed it into her hair, and scrunched it up with two fists. As I let go, it bounced back into place. Finite.

And she loved it.

I had become her personal daily hair stylist. In fact, she loved my work so much that no one else, for years, was allowed to do her hair. Once, a female relative tried to put a brush to it before we went out and Olivia stopped her.

No. Only Daddy does my hair.

I could write a billion books, save an orphanage, and win the World Series by myself, and nothing will ever compare to the pride I had at that moment.

Today, my relationship with Olivia is everything I ever wanted it to be. As a teenager, she’s at the age that everyone warned me would take her away from my life. I feared this and yet, here we are, still going strong. We have shows we watch together, stores we shop at, and advice she comes to me for every day. When she had to practice her dance moves for a summer recreation performance, I was the partner tripping over my feet next to her because she didn’t show me what moves to do. She just watched me fall and said:

You’re bad at this.

She’s right about the dancing. The fatherhood part, I’m doing pretty well and unafraid to say it. You don’t have to be a girl to raise a girl, just like you don’t have to come from a great home in order to make one for your children.

A SINGLE DAD’S SECRET TO RAISING A TEENAGE DAUGHTER