When someone you love has autism, you sometimes forget that you know more about it than the outside world. In many ways, you become an expert in this particular area without even realizing it.

Because of this, we may tend to throw the phrase around without much regard for what others know about it. I might say, “My son has autism” and never even realize that the person I’m talking to has no idea what I mean. I could be having a complete discussion with someone who I think is an educated participant in the conversation. I stand there,  going on and on about how we handle the different challenges of raising a non-verbal child. Then, after an eternity, they turn to me and say.

Yeah. Well, I’m with him. I like when the leaves change colors too.

No. You’re thinking of autumn.

So, yeah, sometimes it requires some explanation. My son Lucas has what many call “severe autism.” He is non-verbal, displays repetitive behaviors, and has pronounced physical characteristics associated with autism. Some refer to it as low-functioning and it’s both similar and different from “high functioning”. Even those with a firm understanding of autism, as it relates to their own family, might have no idea what it means when I say it about my own.

I find that there are misconceptions that might surround my son and, because of that, I just wanted to address a few. It’s a list that might not be true for every family, but it will be true for some. If not, I know it’s at least true for one.

This is such an important thing for me that my first blog post was actually written about it. My child has autism and, because of that, he’s unique. Sure, he can have some challenges in terms of communication and development, but he also has many positive qualities because of it too. He has no ego or evil intentions. He’s not mean or cruel. He’s a pure person. It’s a commonly overlooked thing that deserves applause and has helped shape my appreciation for autism.

It doesn’t, however, make him a superhero. It’s who he is. He’s a person, like you and me. To call him anything else is to separate him from the rest of us and, as a father, that’s the last thing I want. He shouldn’t be elevated as “super” and he shouldn’t be pitied as “cursed”. Autism doesn’t make him less than you or more than you. It makes him him and, to me, that’s perfect.

By the same token, I’m not a superhero for loving him or taking care of him. He’s my son. I brought him here. If I didn’t love him or take care of him, I would be a failure as a father. That’s a pretty fine line between two extremes. Save the “Superhero”. I’ll just settle for Dad. Trust me. Loving this kid is easy. You have no idea.

At first glance, it’s hard to know what my boy comprehends. He can fall back into his own world and seem so entranced by iPads and electronics that you’re convinced he’s not present at the moment. Many times, you’d be right. He can appear to be a million miles away sometimes and, just like many other children, he can be hard to reach.

You can think that he’s not conscious of his surroundings, but that’s when he’ll surprise you. I know him better than anyone and he still shocks me from time to time. During distance learning, his teacher asked that I have him separate Uno cards by color into individual stacks. I rolled my video recorder as I rolled my eyes and handed him the deck.

That’s when he proceeded to divide them up perfectly in record time. He looked like a scene from a comedy movie where they speed up the film to make the characters appear to be running at high speed. Red. Blue. Green. Yellow. I could hear the Road Runner’s “meep meep” in the background. With smoke coming off his fingers he looked back up at me as if to say, “There. Now let’s get that TV back on, Sparky.”

There are plenty of communication roadblocks we hit for a variety of reasons. One happened the other day when he ran into the kitchen and shoved a frozen french fry in his mouth. He winced and made a face that showed he was not a fan.

Then he ate another one.

That’s the kind of stuff that makes me shake my head and repeat a line that’s slowly becoming my catchphrase, “You’re killing me, kid.”

My son isn’t a doctor. He doesn’t line up shoes or toys. He doesn’t scream when hugged.  He doesn’t count cards, toothpicks, or, well, anything. He’s none of those things.

He’s his own person. Just as you wouldn’t allow a movie to dictate your thoughts or expectations for any person’s race, color, or creed, you can’t do it for those affected by autism. It’s good to watch these shows to get an idea of the characteristics someone with autism could demonstrate, but understand that my child doesn’t follow a movie checklist. None of our children do – autism or not.

When I say that my son doesn’t speak, some assume that his vocal cords don’t work. Boy, would they be wrong.

Even now, as I type this, I hear him letting out a rhythmic “ahhhhh” from the other room in time with his Sesame Street videos. Sometimes it’s an excited scream at three in the morning, which would have scared me out of my wits ten years ago, or chirping shouts of glee at the arrival of a freshly-charged iPad. My son’s vocal gymnastics have become the background music of my life.

Aside from that, he is also able to communicate far beyond the ways some people imagine. It took hard work, repetition, and dedication, but he’s made unbelievable strides through the years. Lucas can request anything from food to toys to activities all with a simple push of his communication device’s menu. If not, he can use his PECS board (Picture Exchange Communication System) or hand gestures. Believe me, when this kid wants orange juice, you’ll know it.

He won’t get upset when you hug him 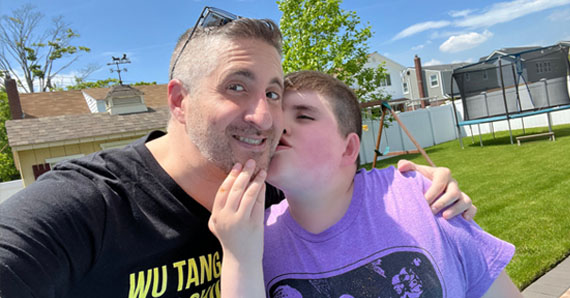 This is one that I wanted to feature the most because, to be honest, it was the one misconception that I struggled with the most at the time of his diagnosis.

Lucas had always been open to affection. As a baby, he loved to be cuddled and that didn’t change as he grew up. He would giggle and laugh with every tickle. It was adorable and, frankly, confusing.

It was confusing because professionals were throwing the word “autism” around and I thought that meant he should cringe at human contact. I remember asking specifically about it. How could my son have autism when I can hug him? I would bring this up as a “gotcha” to prove that they were wrong. Their responses offered no comfort.

With a shrug of the shoulders, they’d reply, “Some kids with autism let you hug them.”

I hated that answer because it felt like a cop-out. It felt like they were just trying to justify their wrong diagnosis. It didn’t make sense.

Now, as he rounds the corner of nine years old, I get it. Sensory issues aren’t the same for every child with autism and, just like some kids on the spectrum might avoid certain food or textures, others don’t. Some with auditory issues hold their ears when around loud noises, while others couldn’t care less. My son is a person with autism who eats everything and can nap through a fireworks display. He also loves to be tickled and wrestled with. That’s who he is. It doesn’t mean he doesn’t have autism. It just means he has unique characteristics of it. I get that now.

A part of me wishes I could go back in time and tell myself that during his early days. Another part of me knows what would happen, though. Me from 2012 would say, “Shut up and get back in your time machine. You’re just trying to trick me.”

That’s because things like this can’t be told to you, even by your future self. You have to learn them on your own and over time. My son showed me that I 45 PIECES OF DAD ADVICE FOR THE CHILDREN after all and as long as he’s in my life, whatever he does or doesn’t become will be fine with me. That’s because I’m his father, he’s my kid, and I’ll love him forever. Despite all the misconceptions, that’s the one truth I’ve always known.

45 PIECES OF DAD ADVICE FOR THE CHILDREN