It’s 10 in the morning on a Sunday and I’m driving out to the old Werner’s Bowl in Lindenhurst to do a public pick-up for a Facebook Marketplace iPad. It was an iPad emergency, so to speak. The reason I needed it was because of that one minute. I just took one minute.

Some of you might actually get what I mean and others might not. If you don’t, let me set the stage a bit. The day before, I took my kids to a block party. It was hosted by my girlfriend Lauren, the mother of my son’s best friend Christian. They had a number of family and friends there. It was a big event and we were so happy to be a part of it.

Of course, being at a house that wasn’t mine, I had growing anxiety as the days approached. Because of this, I ended up spending most of the time watching him like a hawk. It can feel like you’re disjointed from the group in these moments, but it’s needed. I did it to keep Lucas safe and out of trouble. Since he could walk, I have been saving his life numerous times every day of his life. His life is a streaming Charlie Chaplin movie with him consistently teetering on disaster.  This was one of those days.

Then I took a minute to go inside.

As I stood around the kitchen, trying to get some adult time, I could see him in the window. He darted across the backyard, as he had done many times. This time, I wasn’t there to stop him and could only watch as he got into the pool. The problem? He was holding his iPad at chest height the entire time. 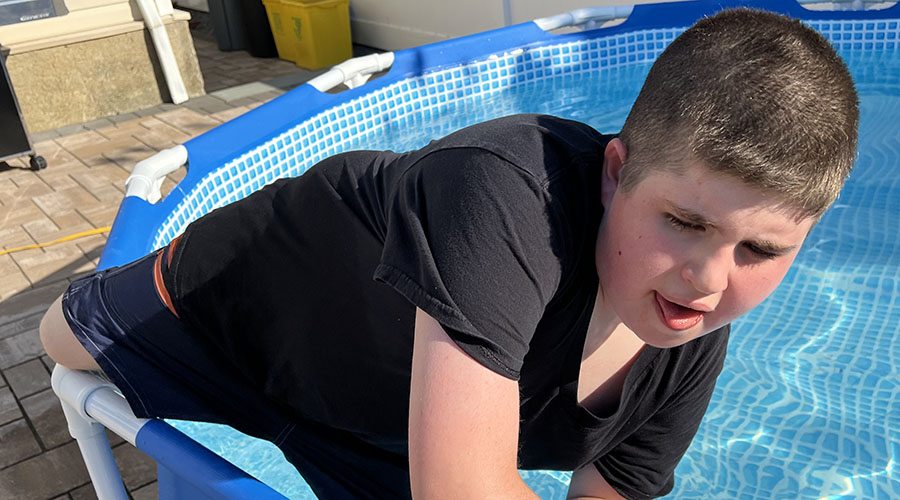 Lucas is non-verbal with autism and I should know that my reaction was dumb in hindsight. As I came running from the sliding door to the steps outside, I waved my arms.

He heard “pool” and “iPad”. What followed was the exact same thing he’s done so many times before. He looked at me with a stunned expression and dropped both his hands as he tried to process what I wanted. When his arms fell down, he dipped the precious device into the water below like an electronic Oreo. I could all but hear it go, “ssssssss” as he did.

That was that. The volume went haywire and the buttons followed. This was the demise of the red-cased iPad. It was the end of an era. What an eight months it has been. Godspeed.

My son is a ninja of mischief. Sure, the things that he does to drive me from zero to frantic in two seconds have changed. He might not be a runner anymore or try to dart to the front door. He doesn’t fall down the stairs, put things in his mouth, or pick up heavy objects. Those issues are done.

Actually, I take that back. They’re probably done. He hasn’t done them in a while but, if I know anything about the phases my child on the spectrum goes through, they can come back at any moment. The second you say, “My kid isn’t a runner,” is the second he runs into the Atlantic Ocean.

He does, however, obsess about food. That’s one issue that has followed us around for years. I was reminded of this at the party when I brought out some lunch for him, Christian, my daughter, and her friend. The boys got finger foods like cheese, sandwiches, and chips. The girls got macaroni salad.

And then, as teenage girls sometimes do, they abandoned the macaroni salad after a few bites.

When I ran inside to throw out some garbage, I returned to see that same stunned expression I always catch him in. Like a cartoon cat with a mouthful of feathers, Lucas stared at me, wide-eyed, sporting macaroni pieces painted around his mouth with mayonnaise. It was pretty gross.

Now, I know what you’re thinking. “That’s not so bad, James.” And you know what? You’re right. It isn’t. I didn’t tell you that story because it was bad.

I told you that story so you’d know the face I got later that day when I stepped into the house after taking a minute to help put some chairs away. I crossed the threshold to see him standing before me…literally covered in cupcake crème.

From behind her phone on the couch, without looking up, my daughter called out to me.

Hey…I think Lucas got into the cupcakes.

Understatement? That’s like saying Garfield got into the Lasagna. Lucas’s entire face was caked in…well, cake. His shirt was now orange from colored icing down to his waist. And his fingers, due to the yellowish-orange crème matching his skin tone, resembled melting claws.

The cleanup is still going on with Lauren finding his little footprints all over the house. Seriously, he went into every room and touched everything. It was as if he plunged his paws into cake and then gave a house tour.

Now keep in mind, no one knows this type of situation better than Lauren does. Christian is similar to Lucas and, because of that, she is fluent in emergency cleansing and handling unexpected chaos. Out of anyone on Earth, she gets it the most and she’s the most compassionate. All she did was try to make me feel better about it.

And still, I feel terrible. So, imagine how I would feel at anyone else’s house.

That’s why I follow this kid around parties and that’s why I’m always ready for an unexpected catastrophe. Sure, he might be an angel nine times out of ten, but that one time is always right around the corner. His sweet moments are good. His devilish moments are epic.

Whether it’s his own safety, the safety of others, or simply the eventual resale value of your house, bringing my boy to your event is something I take very seriously. I want him to get invited back and I want there to be a day when I could really sit down and enjoy a drink without peering over your shoulder every minute like a paranoid coke dealer at the policemen’s ball. Truth be told, that might never happen. I hope it will though.

In the meantime, please know I’m sometimes half-there and half-not. But it’s all with good intentions – you know, the stuff they pave the road to hell with. If there’s hell waiting behind that door though, my kid will find a way to make me chase him in there. Especially if they have cupcakes.