What’s worse than having your special needs child wake up at four in the morning?

Having your special needs child go to bed at four in the morning.

Yes. It’s one of those jokes that some people laugh at and some people cry at. Depending on the day, I have experienced both reactions. Presently, I am in the camp of the latter.

My non-verbal son with autism had an epic evening a few nights ago. After going to sleep around his usual time of seven, he suddenly awoke just before midnight. With an energetic jolt straight from a Red Bull commercial, my little guy decided this would be a good time to watch television. Once he makes up his mind and lets his intentions be known, you’re kind of stuck. I tried to reason with him.

Of course, his counterargument is always so strong and hard to deny. He makes an excellent point.

The argument? He takes my hand in his and flings it in the direction of the TV. How do you argue with that?

With that, I wag my finger like a witch in an old-time fairy tale. Then I make him mimic the no-no-no motion. He does, although his fingers are pinched together like a chef’s kiss as he does. Even in this unwanted late-night interaction, he’s adorable.

The second his no-no-no is complete, he takes my hand and flings it again towards the TV set, before following up with a giant whine. It sounds like a baby elephant being thrown from an airplane. 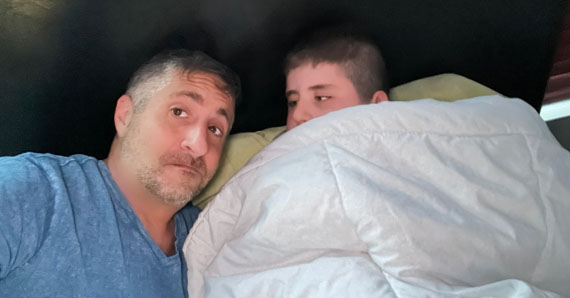 This is the point where, if he was neurotypical, I would give him some vague threat about losing television for a week and then storm off, leaving him behind to wish bad things upon me. With Lucas, however, that doesn’t work. It certainly didn’t work on this night. Not even close.

As I left the room, closing the small gate on his door behind me, he immediately jumped up, ran to the metal frame, and began shaking it like the Ultimate Warrior. The clangs rang out and I chose to do what you all are expecting a parent in my position to do. I ignored it. Kid’s gotta learn, right?

Undeterred, he reached down and ran his fingers across it as if he was a prisoner in an old-timey movie requesting more water in his metal cup. This is the normal chain of events in these situations. Ultimate Warrior. 1930s convict. Clang, clang, clang. Ching, ching, ching. Repeat.

The whole time, I might add, he makes eye contact with me. My bed, situated down the hallway looks directly into his room. He stands there and stares me down with each motion. When he is in these moods, nothing I do can make him break his glare or his forget his request.

Left with no options, I usually get up in a huff and come running down the hallway. My hope is that he will see me angry and stop. Of course, you’d think I would have learned by now that doesn’t work.

He continues eye contact with me and, as I make it to his room, he freezes in place. Sometimes, he will duck down a few inches in a move I am somewhat convinced that he thinks makes him invisible. Even if not, it’s not like I do anything when I get there but stare at him angrily anyway. He knows this. It’s at this point that I begin losing the war.

He understands “head on the pillow” and will appease me briefly while I load up his Chromecast. Raffi is his visual lullaby and, six times out of ten, it does the trick. This night was one of the oppositional four.

It ended up just being “one of those nights.” He was stubborn on levels I hadn’t seen in a long time, with the process going on and on for hours. We clashed over things like wanting a drink of water – which he asks for by tossing his metal cup over the gate. We battled over his desire to jump around the room screaming with glee at 1AM rather than “head on the pillow”. Closet doors were slammed in a stimming manner. His mattress was knocked on and off the box spring. I laid with him, which never works. I changed his pajamas. I tucked in his sheets. I did it all. By the time he finally conked out at four, I was ready to sell him on Craigslist.

When he woke up at eight the next morning, I was still pretty angry.

Him? Not so much.

In fact, my arrival at his door, all hunched over and hazy, was met with applause and laughter. He jumped out of bed, oblivious to the exhaustion he should have been experiencing. The eye contact now was very different than the eye contact mere hours earlier. There was no stubbornness in his pupils. There was pure love. As he does every morning, he made me feel like a celebrity.

Suddenly, my annoyance melted away. My back still hurt and my eyes were still heavy, but my son was awesome. I felt guilty for being angry at him. Despite the fact that my patience was beyond what others in my position would have had, I still wish I had more. Even when I give this kid everything I have, I wish I had more to give. He deserves everything.

It’s not easy teaching consequences to a child who had no concept of consequences. Maybe it’s his autism or the fact that he’s non-verbal or just simply a kid. Selfishness doesn’t cause him to disregard my needs, be they sleep or otherwise. He does it because he really doesn’t understand them. All he knows is what he wants at that moment. Between communication barriers, impulse control, and thinking like a child below his age range, he doesn’t know how to express himself in a way that could be considered diplomatic. You’ve heard the term doing surgery with a chainsaw? He uses nuclear weapons.

I try to remember that during those tough nights. Although four in the morning is a rough time to understand anything. I’m trying. That’s what’s most important.

Those hellish evenings can be brutal. One day, he might “get it”. But even if he doesn’t, I just remind myself that there will be a smile waiting in the morning. That’s what lets me know I am doing things correctly. All we need to do is make it through the night.

REMEMBERING HOW STRANGERS SEE MY NON-VERBAL SON WITH AUTISM