At the end of every rainbow is another rainbow. At the end of that is a puppy dog riding a candy cane and you can do anything you put your mind to. Stay in school. Don’t do drugs. Be all that you can be.

Ah. Feels good, right? Positive thoughts by positive thinkers told to struggling people in order to feed their positivity. You probably need to read those things now and then, right? I can relate. Sometimes I do too.

Stuck in this house with all the insanity going on around us, my social media feeds have become a nonstop party of positivity and, to be honest, I feel like a Grinch complaining. I mean, what type of dipstick doesn’t want to see children painting rainbows on the porch or teddy bears eating Ritz Bits, or whatever the hell they’re doing? It’s nice. Who doesn’t like nice?

Back off, Guy Smiley. I like nice. Everybody likes nice. There are many times when you need it. Sometimes, though, nice doesn’t cut it. Sometimes too much of the nice is, well, not. 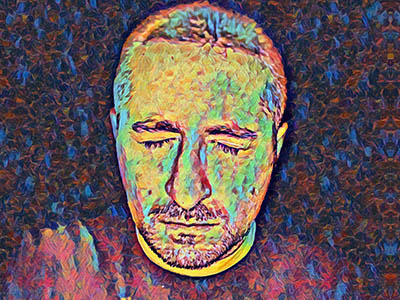 I can’t be the only one, which is why I’m writing this. I know that in this roller coaster time of fear and loathing in Corona, there are plenty of others out there experiencing a ping pong of emotions. For some of us, it’s not about the sun coming out tomorrow or shiny happy people. It’s about standing up, dusting off, and moving forward.

Oh, and before you start searching for Hi Blog links to send me, I know that I have done the very same thing I’m preaching against. I know I have put out words, thoughts, and content that are meant to uplift and make you see the silver linings. I believe everything I’ve ever written, but I too acknowledge that there are times when those words aren’t what even I need to read. I’ve gone back, skimmed my own posts at times and thought, “Ah, shut up.”

That doesn’t mean I’m broken or grouchy. It means I’m human. It means that there’s no cure-all for the pandemic blues. If hearing a happy quote worked every time, we’d all loop Mr. Rogers on our TVs and dance the days away. The truth is, sometimes it’s more nuanced than that.

Sometimes you need Eminem or Marilyn Manson to make you stand up and throw air punches to get your second wind. You need to look yourself in the mirror, curse yourself out, take a shower, and move on with your day. There’s nothing more liberating during some moments than a good old-fashioned passionate body slam into the invisible man to get yourself going.

Sometimes those golden sentiments of happy-happy joy-joy work in the opposite direction. Sure, they are meant to lift you up, but they remind you that you’re down. Honestly, there are times when I forget about the instability we’re currently living in…until I scroll past someone showing me a doctor holding a picture of a heart they made with the words “never give up”. Suddenly, I’m back in that dark place again, reminded of the new C-word. Suddenly, everything sucks again.

Compounding that sadness is the guilt. It’s the guilt over being annoyed at happiness on social media. What is wrong with me? They’re just being nice. What a grump I must be. The world is ending. Doctors are painting rainbows on hospital windows. Yet, here I am mad about it. Way to go, Groucho.

So, I do what I suggest we all do in that situation. I turn off Facebook. I turn off Instagram. I turn off Twitter. I turn off Myspace, which I don’t have…but if I did, I would turn it off.

I watch a scary movie with my kids. I play a violent video game. I tell my Spotify to play Nine Inch Nails on repeat. I do whatever I can to take my mind off of things. As non-zen as it may sound, that works.

Maybe it doesn’t work for you, but it works for me. I suspect that I’m not alone. Facebook will still be there when I’m ready and there will still be teddy bears in the windows awaiting my return. If I take my sporadic time out, I’ll be able to appreciate them again when I do.

No guilt. No shame. No worries. No blame. Do what works for you. If it’s a unicorn day, paint some unicorns. If it’s not, don’t. There’s nothing to feel bad about. This is uncharted territory. Whatever you need to do to get through it, do it. No one is judging you.

Because behind every ray of sun, there is a glimmer of…ha. Gotcha. Go punch the washing machine, Sparky. You’ll feel better.