Maybe it was the nonchalant way she asked that should have been the first sign it was real. Olivia walked into my office and asked an all-too familiarly formatted question.

Why is Lucas naked?

It was the last day of school before Christmas break. With minutes to go before her brother’s bus arrived, I knew, for a fact, that he wasn’t naked.

He’s not naked. He’s wearing an elf blanket sleeper. It’s pajama day at school. Are you asking why he’s in pajamas?

I had literally just left him in the den to watch Sesame Street so I could check my email. There was no way this boy was naked. I stood up and started to walk from the room and, just as I told her, his pajamas were there…

…on the floor in a pile. So were his t-shirt, shorts, and everything that had previously been underneath. My son was naked as a Jay Bird, as they say and while I’ve never seen a Jay Bird, I can guess that they don’t wear elf blanket sleepers.

Lucas! What are you doing?!

He was cuddled up happily under a blanket. As I frantically tried to put his clothes back on, I repeated “No, no, no,” and “we don’t take our clothes off”. Olivia, feeling sufficiently justified, giggled her little face off.

I am all too familiar with the old “Why is Lucas (blank)?” question. Olivia has asked it since he was a baby and it’s the first sign that things are about to take a turn. It can range from obvious to things you have to put thought into.

Why is Lucas upside down on the stairs?

Why does Lucas get to run in the living room while we’re all sleeping?

Why is Lucas eating little pieces of candy?

The answers range from:

Oh no! Lucas! Be careful on the stairs!

We need to fix the gate on Lucas’s door.

What the heck is he…Lucas! No! Take that out of your mouth! What are you doing?!

To put it plainly, my non-verbal bundle of joy doubles as a bundle of terror. He does it all with an adorable expression on his round little face, so it softens the blow. But still, he’s a handful – a nice little naughty handful. 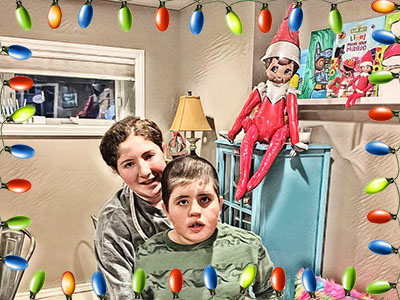 A rose with any other vocabulary would sting the same, though. I know this because Olivia, his stooging sister, has more words than Google Translate and those bring their own style of insanity too.

It started as soon as she learned the words themselves. I can remember the day she came home from daycare and, in one of my favorite stories that I have almost definitely shared before, declared that Gavin had said a bad word. Even the way she said it was cute.

Aw. I can still see that Cabbage Patchy-looking kid, with her chubby cheeks and bright eyes. It was almost too sweet for words – well, most words, as I’d soon learn. My wife and I, in that condescending adult to toddler talk, asked for further clarification.

Oh yeah? And what bad word did Gavin say?

I froze. My wife, well, she laughed in Olivia’s face. In all fairness, it was one of the funniest things I had ever heard. If humor is the unexpected happening, then this was humor in its purest form. I held it together and explained.

Oh wow. That is a bad word. You know that you don’t ever say those words, right?

Now, over ten years later, those four letter gems still rear their ugly heads into our lives and my daughter is still conscious of the rule. She can hear them, but she can’t say them. Oh, and make no mistake, she hears them.

I don’t rush to change the channel on the TV or cover her ears when something bad is uttered during a show she’s watching. She lives in the real world.  I went to Middle School too, so I know how these little vagrants interact. I try to keep the lines of communication open with her, so I get all the dirt from the hallways. She knows I won’t stooge her out and my goal isn’t to call other parents with news about their bratty kids.

So, when we had a long casual talk about cursing one night, she was open and honest with me. That’s when I learned how often she hears these shocking things.

I let you hear them on TV, because I figure kids curse, right? You hear bad words.

She seemed excited at the prospect of sharing this hidden world with her ol’ Dad. Again, I expected some form of jerkpoop. Instead, she got up and performed for me.

Daddy, this boy has friends with lockers near mine. And every day, he runs up to them and goes…

At this point, she started to swing her arms around like LL Cool J. Dated reference? Sorry. I’m a dated person. Live with it.

Yeah. As a side note, I’m not censoring her. She genuinely said the letters rather than the words. I told you. She’s a good kid.

Like no time had passed, I contained my laughter – the same laughter that many people have spit out upon hearing this story since it happened – and gave the same advice I gave when she still had curly pigtails and a Dora The Explorer T-Shirt. Her mannerisms, mixed with her lingo, mixed with her little girl demeanor all made it just as funny now as it was then. I held it together. You should be proud of me.

Oh wow. You know you never say those words, right?

She nodded. And I knew she wouldn’t, just like I knew when she was still toddling. She hasn’t let me down since. In a world of naughty, I could count on her to stay nice. Well, in this instance at least.

It’s a brutal world at times and Santa’s always watching. Even when they’re bad, though, these little buggers are still kind of good. For that I’m proud. They might leave a pile of elf pajamas in their wake, but one thing is certain. My kids definitely know what the f is up.

JG Note: With Christmas Day on Wednesday, I’ll be back with my next post on Monday, December 29th. If you celebrate Christmas, please have a very Merry Christmas. If you don’t, please send your best wishes to anyone you know who does. Thank you for reading and sharing my stories. I wish you all a Happy Holiday, whatever that holiday may be. Hope you have a great week.